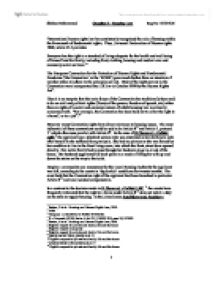 Everyone has the right to a standard of living adequate for the health and well-being of himself and his family, including food, clothing, housing and medical care and necessary social services.[1]”

The European Convention for the Protection of Human Rights and Fundamental Freedoms (‘the Convention’ or the ‘ECHR’) goes much further than an intention of member states to adhere to the principles set out.  Most of the rights set out in the Convention were incorporated into UK law in October 2000 by the Human Rights Act[2].

Thus it is no surprise that the main focus of the Convention has traditionally been said to be on civil and political rights (liberty of the person, freedom of speech, etc) rather than on rights of a social and economic nature of which housing law is primarily concerned with.  “For example, the Convention has been held not to cover the right to a home[3], or to a job[4].”[5]

However many Convention rights have direct relevance to housing issues.  The most influential of these conventions could be said to be Article 8[6] and Article 1, protocol 1[7] which often runs parallel with Article 8[8].  In the case of R (Bernard v Enfield LBC[9] the applicant was a disabled woman who was restricted in her abilities to look after herself as she suffered from paralysis.  She had no privacy as she was forced by her condition to live in the front living room, into which the front, street door opened directly.  Her entire family had to pass through her bedroom to go in or out of the house.  Her husband aggravated his back pains as a result of lifting his wife up and down the stairs on the way to the toilet.

Despite a community care assessment by the Local Housing Authority the applicant was left, according to the courts in ‘deplorable’ conditions for twenty months.  The court held that the Convention right of the applicant had been breeched in particular Article 8[10] and was awarded compensation.

In a contrast to the decision made in R (Bernard v Enfield LBC[11] the courts have frequently reiterated that the right to a home under Article 8[12] does not entail a duty on the state to supply housing.  In the joined cases Anufrijeva and Another v Southwark London Borough Council[13]; R(Mambakasa) v Secretary of State for the Home Office[14]; R(N) v Secretary of State for the Home Office[15] (Lord Chief Justice, Master of the Rolls and Auld LLJ) ruled on October 16 2003 that “misadministration in the provision of welfare support such as the provision of housing did not infringe the right to private or home life under Article 8 unless the public authority in question was particularly culpable and even then damages should not necessarily be awarded”.

The importance of housing as a fundamental right has always been stressed but has only recently been enforced by legislation.  The European Convention of Human Rights (‘the Convention’) is an international agreement entered into by the member states of the Council of Europe in November 1950.  The Human Rights Act[19] makes the principal rights and freedoms enshrined in the Convention directly enforceable in domestic courts.

The Human Rights Act[20] does make a difference to how important the Convention is to housing lawyers.  It opens the door for debate and challenges decisions on their legality and procedural impropriety that may have been perpetrated by public authorities such as Local Housing Authorities.  It allows for a degree of accountability that would otherwise be impossible to comprehend and enforce through domestic law.

In the case of Mendoza v Ghaidan[21] Mr Mendoza, from 1972, lived in a stable and permanent homosexual relationship with his partner.  Mr Mendoza and his partner lived together in the same way that spouses live together in a married relationship.  In possession proceedings brought by the claimant on the tenant's death in January 2001 the judge granted a declaration that the defendant did not succeed to the tenancy of the flat as the surviving spouse of the original tenant within paragraph 2 of Schedule 1 to the Rent Act 1977 n1 but became entitled to an assured tenancy of the flat by succession as a member of the original tenant's family within paragraph 3(1) of that Schedule.

This decision was based on the earlier judgement of Fitzpatrick v Sterling Housing Association[22] where it was held that the expression ‘living with the tenants as his or her husband or wife’ was gender specific, and was only construed to mean heterosexual relationship and was not capable of encompassing same sex relationship.

Mr Mendoza appealed on the grounds that, since he and the original tenant were partners in a longstanding homosexual relationship.  The Rent Act[23] should be interpreted in a way which is compatible with his Convention rights pursuant to section 3 of the Human Rights Act[24] which states that:

“So far as it is possible to do so, primary legislation and subordinate legislation must be read and given effect in a way which is compatible with the Convention rights.[25]”

This is further highlighted by the case of R (Morris) v Westminster CC[30].  Ms Morris was a British Citizen.  Her 2 year old daughter was a Citizen of Mauritius.  The child was subject to immigration control and so could not confer priority need on Ms Morris case for housing under s185 (4) of the Housing Act[31].

Miss Morris applied for a judicial review on the basis that the decision was in breech of Article 8[32] and Article 14[33].  The court held that s185 (4)[34] was incompatible.  It issued a certificate of incompatibility.

The courts statement of incompatibility gives effect that Parliament is now required to change the legislation so that it is no longer incompatible.  “Until the legislation is changed housing authorities should use their power to accommodate applicants who are not in priority need so as to avoid a breach of a Convention right.  An applicant who is unintentionally homeless and eligible, but not in priority need because of the effect of s185 (4), could seek judicial review of any refusal to accommodate on the basis of a breach of their Convention Rights i.e. Articles 8 and 14.”[35]

[7] Right to respect of property