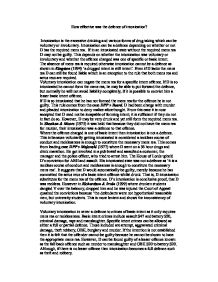 How effective was the defence of intoxication?

How effective was the defence of intoxication? Intoxication is the excessive drinking and various forms of drug taking which can be voluntary or involuntary. Intoxication can be a defence depending on whether or not D has the required mens rea. If in an intoxicated state without the required mens rea D may not be guilty. This depends on whether the intoxication was voluntary or involuntary and whether the offence charged was one of specific or basic intent. The absence of mens rea is required otherwise intoxication cannot be a defence as shown in Kingston (1994) 'a drugged intent is still intent'. Even if D lacks the mens rea D can still be found liable which is an exception to the rule that both mens rea and actus reus are required. Voluntary intoxication can negate the mens rea for a specific intent offence. If D is so intoxicated he cannot form the mens rea, he may be able to put forward the defence, but normally he will not avoid liability completely, if it is possible to convict him a lesser basic intent offence. If D is so intoxicated that he has not formed the mens rea for the offence he is not guilty. ...read more.

Therefore Heard provides an alternative definition of 'specific' intent; where the prosecution must prove some 'purpose' on the part of D, which 'goes beyond the actus reus'. In Attorney General for Northern Ireland v Gallagher (1963) D had a grudge against his wife and decided to kill, he prepared himself by buying a knife and bottle of whisky to give himself Dutch Courage. His conviction for murder was restored by the House of Lords and affirmed that the defence was not available in a crime of basic intent and that even in a crime of specific intent it had to be shown that the degree of drunkenness was such that D 'rendered so stupid by drink that he does not know what he is doing'. D's intoxication will be considered involuntary if drugs taken under medical prescription, calming/soporific drugs, drink or drugs taken by D without his knowledge and taken under duress. If intoxication is involuntary then the defence will be available to basic and specific intent crimes as long as D lacks the mens rea. If the intoxication negatives mens rea, he is entitled to an acquittal; otherwise he remains liable, even though he would not have acted as he did had he remained sober. ...read more.

This was followed by Fatheringham (1998) D claimed he was very drunk and has mistakenly raped a 14 year old babysitter believing that it was his wife. Court of Appeal held that mistake caused by self-induced intoxication cannot be a defence and neither a defence to crimes of basic intent. If the mistake is the amount of force needed in self-defence, D will not have a defence of basic and specific intent crimes. This was stated in O'Grady (1987) which D claimed V hitting him and so hit V with a glass ashtray and woke the next morning to find V dead. D was convicted of manslaughter, a basic intent offence which was upheld by the Court of Appeal. This was later confirmed in Hatton (2005) D believed that V hit him with a 5 foot long stick and he had defended the attack. When D awoke he found V dead from injuries caused by a sledgehammer. D was convicted of murder. The Court of Appeal held that the decision in O'Grady was not limited to basic intent crimes and applied to specific intent crimes. A drunken mistake about the amount of force required in self-defence was not a defence. By refusing to allow a drunken mistake as to the amount of force required, the law is trying to balance the need to be just to the defendant with the protection of victims. ...read more.

Summary:
This piece explains the defences of voluntary and involuntary intoxication and uses cases in support. However it never addresses the question 'How effective is the defence ...'
Rating: ***