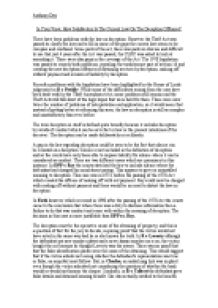 How Satisfactory Is The Current Law On The Deception Offences?

﻿Anthony Day In Your View, How Satisfactory Is The Current Law On The Deception Offences? There have been problems with the law on deception. However the Theft Act was passed to clarify the law and to fill in some of the gaps the current law seems to be complex and confused. Some parts of the act, there was parts so obscure and difficult to use that just 4 years after the Act was passed, the CLRC was asked to look at amending it. There were also gaps in the coverage of the Act. The 1978 legislation was passed to remedy both problems, repealing the troublesome part of section 16 and creating the new deception offences of obtaining services by deception, making off without payment and evasion of liability by deception. Recently problems with the legislation have been highlighted by the House of Lords judgement in R v Preddy. While some of the difficulties arising from the case have been dealt with by the Theft Amendment Act, some problems still remain and the Theft Acts still fall short of the high hopes that were held for them. There were now twice the number of problems of interpretation and application, so it would seem that instead of getting better at reforming this area, the law on deception is still as complex and unsatisfactory than ever before. ...read more.

the law here seems to be acting in an unsatisfactory manor and although they treated like cases alike they treated them in the wrong way. There have been problems too regarding ca defendant who pays for something using his or her own cheque or credit card as it is difficult to see what the deception is in such circumstances, The courts have created liability by holding that the user is representing that he has the authority of the bank or card company to uses the card. This can be criticised as it is criminalising conduct which would normally be a civil debt and could be dealt with through debt processing in the civil courts. However there has been a confliction regarding this and leading to the law on deception being seen as unsatisfactory in the cases of Fitzeal Nabina and Lambie. In the case of Fitzeal Nabina the defendant obtained credit cards in his own name by false pretences obtained credit cards in own name but under false pretences, used the card in various shops however the defendant was found not guilty of obtaining property by deception contrary to s15 of the Theft Act 1968. This was because the Court Of Appeal held he had the authority of the card companies to use the cars. ...read more.

Evasion of a liability by a deception has in itself been under scrutiny as to the laws role in keeping this area of the law satisfactory. It is however the area of law that caused the greatest problems. The case of R v Sibartie illustrates the problem of overlap between the subsections which in turn causes confusion, conflict and makes the law unsatisfactory. In R v Sibartie, the defendant was convicted of attempting s2(1)(c) when he deceived a ticket collector on the underground into believing that he had paid for the whole of his journey. In fact, he had only purchased tickets which covered the first few and last few stations in his journey. The court of first instance said that that was a dishonest attempt to obtain an exemption from the liability to pay the excess. On appeal, it was argued that this was an attempt to induce the creditor to forgo payment of part under s2 (1) (b). The Court of Appeal held that although this illustrated the overlap between s.2 (1) (b) and s.2 (1) (c), it did not make liability under s.2 (1) (c) wrong. This case shows there is too much overlap between the offences which could cause confusion. The only clear difference is that s2 (1) (b) requires proof that the defendant intends to make permanent default. This requirement is not included in the other two subsections. . ...read more.