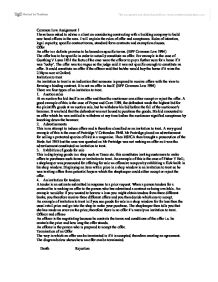 I have been asked to advise a client on considering contracting with a building company to build new head offices in the area. I will explain the rules of offer and acceptance. Rules of intention, legal capacity, specific contract terms, standard form con

Common Law Assignment 1 I have been asked to advise a client on considering contracting with a building company to build new head offices in the area. I will explain the rules of offer and acceptance. Rules of intention, legal capacity, specific contract terms, standard form contracts and exemption clauses. Offer An offer is a definite promise to be bound on specific terms. (BPP Common Law 1994) The offer has to be specific in order to actually constitute an offer. For example in the case of Gunthing V Lynn 1831 the facts of the case were the offeror to pay a further sum for a horse if it was 'lucky'. The offer was too vague so the judge said it was not specific enough to constitute an offer. It could constitute an offer if the offeror said that he/she would buy the horse if it wins the 2.30pm race at Oxford. Invitation to treat An invitation to treat is an indication that someone is prepared to receive offers with the view to forming a binding contract. It is not an offer in itself. (BPP Common Law 1994) There are four types of an invitation to treat. 1. Auction sales At an auction the bid itself is an offer and then the auctioneer can either accept or reject the offer. A good example of this is the case of Payne and Cave 1789, the defendant made the highest bid for the plaintiff's goods at an auction sale, but he withdrew his bid before the fall of the auctioneer's hammer. It was held that the defendant was not bound to purchase the goods. His bid amounted to an offer which he was entitled to withdraw at any time before the auctioneer signified acceptance by knocking down the hammer. 2. Advertisements This is an attempt to induce offers and is therefore classified as an invitation to treat. ...read more.

The House of Lords held that it was an implied term of a lease of a maisonette in a Council block that the landlord should take reasonable care to keep the common parts of the block in a reasonable state of repair. The term was clearly not implied in fact: the "officious bystander" test was not satisfied; nor was the implication necessary to `give business efficacy to the contract. The implication arose because the nature of the relationship made it desirable to place some obligation on the landlord as to the maintenance of the common parts of the premises. It amounted to the imposition of a legal duty, in spite of the fact that no term could be implied in fact. However, on the facts there had been no breach of the obligation. (Taken from (Taken from www.lawteacher.net/Contract/Contents/termscases.htm Accessed on 17 November 2005) Innominate Terms In this case the remedy available will depend on the seriousness of the breach, if the breach is so serious that it goes to the root of the contract then the innocent party will be entitled to repudiate the contract and claim for damages. This was demonstrated in the case of Cehave NV v Bremer Handelsgesellschaft mbH (The Hansa Nord) 1975 where the buyers of citrus pulp pellets rejected the goods because they were in a damaged condition and later bought them at a cheaper price and used them for the same purpose. It was held to be a wrongful rejection of the goods as there was not a serious breach of contract and that the buyers were only entitled to damages. (Taken from homepages.unl.ac.uk/~bamfordj/lecture5.htm accessed on 17 November 2005) In theses type of cases the courts could delay deciding whether an event is a breach of condition or warranty until the extent of the damage is known. Intention, Capacity and Form Intention Intention has to be implicity, which means you do not have to say it but you imply it, for example saying to somebody something, does that does not form a contract. ...read more.

in the case of a contract for sale by sample, which would have been apparent on a reasonable examination of the sample. (3) Where the seller sells goods in the course of a business and the buyer, expressly or by implication, makes known - (a) to the seller ... any particular purpose for which the goods are being bought, there is an implied term that the goods supplied under the contract are reasonably fit for that purpose, whether or not that is a purpose for which such goods are commonly supplied, except where the circumstances show that the buyer does not rely, or that it is unreasonable for him to rely, on the skill or judgment of the seller ... The terms implied by sections 14(2) and (3) are conditions: s14 (6) Sale by sample Section 15 provides: (2) In the case of a contract for sale by sample there is an implied term - (a) that the bulk will correspond with the sample in quality; (c) that the goods will be free from any defect, making their quality unsatisfactory, which would not be apparent on reasonable examination of the sample. The term implied by s15 (2) is a condition: s15 (3). Modification of remedies for breach of condition in non-consumer cases Section 15A provides: (1) Where in the case of a contract of sale - (a) the buyer would, apart from this subsection, have the right to reject goods by reason of a breach on the part of the seller of a term implied by sections 13, 14 or 15 above, but (b) the breach is so slight that it would be unreasonable for him to reject them, then, if the buyer does not deal as a consumer, the breach is not to be treated as a breach of condition but may be treated as a breach of warranty. (2) This section applies unless a contrary intention appears in, or is to be implied from, the contract. (3) It is for the seller to show that a breach fell within subsection (1) (b) above. Taken from slcc.strath.ac.uk/scotslawcourse/contract/con2/Statutes/ucta1977. ...read more.