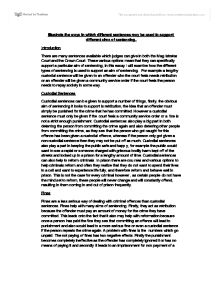 Illustrate the ways in which different sentences may be used to support different aims of sentencing.

Illustrate the ways in which different sentences may be used to support different aims of sentencing. Introduction There are many sentences available which judges can give in both the Magistrates Court and the Crown Court. These various options mean that they can specifically support a particular aim of sentencing, in this essay I will examine how the different types of sentencing is used to support an aim of sentencing. For example a lengthy custodial sentence will be given to an offender who the court feels needs retribution or an offender will be given a community service order if the court feels the person needs to repay society in some way. Custodial Sentences Custodial sentences can be given to support a number of things, firstly, the obvious aim of sentencing it looks to support is retribution, the idea that an offender must simply be punished for the crime that he has committed. However a custodial sentence must only be given if the court feels a community service order or a fine is not a strict enough punishment. ...read more.

Fines Fines are a less serious way of dealing with criminal offences than custodial sentences. Fines help with many aims of sentencing. Firstly, they act as retribution because the offender must pay an amount of money for the crime they have committed. This leads onto the fact that it also may help with reformation because once a person has paid the fine they see that committing an offence will lead to punishment and also would lead to a more serious fine or even a custodial sentence if the person repeats the crime again. A problem with fines is the numbers which go unpaid. The not paying of fines has two negative effects. Firstly the punishment becomes completely ineffective as the offender has completely ignored it or has no means of paying it and secondly it leads to an imprisonment for non payment of a fine. The Courts Act 2003 introduced a discharge of fines by unpaid work to solve this problem meaning that people with financial problems or with no way of paying the fine can work it off by doing community work. ...read more.

This type of sentence is intended to be used where punishment does not seem necessary and if an offender reoffends in the set time period the court can impose an additional sentence upon the offender as well as charging them for the new offence. Conclusion: To summarize my essay I would say that the current types of sentencing excellently deal with the aims of sentencing although there are some criticisms of these. An example of some of the criticisms of the types of sentencing and how they achieve these aims is that with custodial sentences, it is likely that the person would have been either under the influence of drugs or alcohol when committing the offence so they may not be deterred by the custodial sentence given. Another criticism is that repeat offenders will have previously experienced sentences and it would waste money to attempt to reform them when they have shown no clear means of any reformation in any previous sentences. However even though there are these criticisms I feel that these only represent a minority of offenders sentenced, and that the majority of sentences given to reach the aims they are intended to. ...read more.