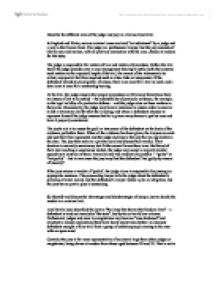 Describe the different roles of the judge and jury in a Crown Court trial. In England and Wales, serious criminal cases are tried "on indictment" by a judge and a jury in the Crown Court. The judge is a professional lawyer, but the jury consists of twelve men and women, with no previous connection with the case, chosen at random for this duty. The judge is responsible for matters of law and matters of procedure. Before the trial itself, the judge presides over a case management hearing to settle (with the lawyers) such matters as the expected length of the trial, the names of the witnesses to be called, any special facilities required such as video links or interpreters. If the defendant intends to plead guilty, of course, there is no need for a trial as such, and a date is set at once for a sentencing hearing. At the trial, the judge ensures that proper procedures are followed. Sometimes there are issues of law to be settled - the admissibility of particular evidence, for example, or the legal validity of a particular defence - and the judge rules on these matters as they arise. ...read more.

If the jury returns a verdict of "guilty", the judge alone is responsible for passing an appropriate sentence. The prosecuting lawyer tells the judge about the defendant's previous criminal record, and the defendant's lawyer makes a plea in mitigation, but the jury has no part to play in sentencing. (b) Identify and discuss the advantages and disadvantages of using a jury to decide the verdict in a criminal trial. Lord Devlin once described the jury as "the lamp that shows that freedom lives" - a defendant is tried not merely by "the state", but by his or her fellow-citizens. Professional judges and even lay magistrates may become "case-hardened" and reluctant to accept explanations they have heard many times before: an innocent defendant may get a fairer trial from a group of ordinary people coming to the case with an open mind. Certainly the jury is far more representative of society at large than either judges or magistrates, being drawn at random from those aged between 18 and 70. That is not to say that each individual jury is representative: once in every two thousand cases, for example, the random jury will be all-male or all-female, and quite often it will be all-white even in areas with a significant black population. ...read more.

Similarly in R v Blythe, the jury refused to convict a man who supplied cannabis to his sick wife, having found this was the only way to ease the pain of her illness. But this can be taken too far: in R v Owen the jury acquitted a man who shot the careless driver who had killed his son. Jurors may also forget that their job is to try the case on the evidence, disregarding all prejudice and other irrelevant factors. In R v Young a man was convicted of murder after four jurors held a s�ance in which they supposedly spoke with the spirit of the victim, and psychological experiments have shown that the defendant's personal appearance can influence the jury's decision. Another disadvantage of the jury system is that it imposes a heavy burden on ordinary people, who have to leave their job, their education or their family commitments for two weeks to sit in the Crown Court. Until quite recently busy people could be excused jury service, but the law has now been changed to make this much more difficult. It seems foolish that a highly skilled doctor, for example, must leave his life-saving work to decide whether a person is guilty of shoplifting. ...read more.