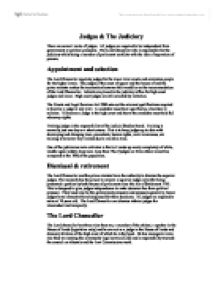 Judges & The Judiciary There are several levels of judges. All judges are required to be independent from government or political pressures. The Lord Chancellor who is responsible for the judiciary whilst being a member of parliament conflicts with the idea of separation of powers. Appointment and selection The Lord Chancellor appoints judges for the lower level courts and nominates people for the higher levels. The judges of the court of appeal and the house of lord the prime minister makes the nomination however this would be on the recommendation of the Lord Chancellor. Adverts are placed in the judiciary office for high court judges and lower. ...read more.

This is to keep judges up to date with developing and changing laws, precedents, human rights, racial awareness, etc training is however very limited due to available time. One of the judiciaries main criticism is that is it made up nearly completely of white, middle aged, middle class men. Less than 1% of judges are from ethnic minorities compared to the 10% of the population. Dismissal & retirement The Lord Chancellor and the prime minister have the authority to dismiss the superior judges. The monarch has the power to remove a superior judge only after being presented a petition by both houses of parliament since the Act of Settlement 1701. ...read more.

He has managerial roles also they are running the community legal service (CLS) and a responsibility towards the council on tribunals and the Law Commissions work. The Lord Chancellor is appointed and dismissed by the prime minister. Being a member of the cabinet when the government changes, as does the Lord Chancellor. The Lord Chancellor is unique as he is the only person in the three 'arms' of the state these are: 1) Legislative- making the laws 'parliament' 2) Executive- administering law 'the cabinet' 3) Judicial- applying the law 'judges' This is known as separation of powers these three areas 'arms' are required to be separate so that they can keep check on each other. ...read more.