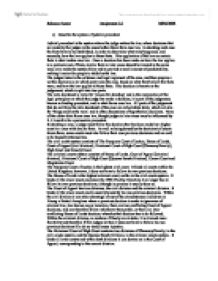 a) Describe the system of judicial precedent Judicial precedent is the system where the judge makes the law, where decisions that are made by the judges in the cases before them form case law. In deciding each case the facts have to be established, in order to determine what truly happened, and secondly, how the law applies to those facts. This application of the law on certain facts is what makes case law. Once a decision has been made on how the law applies to a particular set of facts, similar facts in later cases should be treated in the same way, as to make the system fairer and to provide a small amount of predictability, making it easier for people to abide by the law. The judges listen to the evidence and legal argument of the case, and then prepare a written decision as to which party wins the case, based on what they believe the facts were, and how the law applies to those facts. This decision is known as the judgement, which is split into two parts. The ratio decidendi is Latin for 'reason for deciding' and is the explanation of the legal principles on which the judge has made a decision; it is part of the judgement, known as binding precedent, and is what forms case law. ...read more.

The High Court can produce precedents for the lower courts, unlike the Crown Court who does not create binding precedent unless a High Court judge is sitting, and then it may be persuasive. The County Court, of the civil courts, and Magistrates Court, of the criminal courts, are the inferior courts. They are not bound by their own previous decisions and neither can make precedent, either binding or persuasive. The system of judicial precedent has some advantages and disadvantages. It provides an element of certainty, meaning litigants can assume like cases will be treated the same. It can respond to real situations, which are more based on theory and logic. The system is flexible, case law can make changes far more quickly that parliament can. However, there are thousands of decided cases that future cases can be based on, detracting from judicial precedents certainty. Judges could make illogical distinctions between cases, by making minute distinctions, again taking away the certainty of the system. There is dependence on chance, as important changes may not be made to the system as no new precedents can be created. Overall the system of Judicial Precedent is a fair one. ...read more.

It provides some degree of certainty upon which individuals can rely upon conduct of their affairs, as well as a basis for orderly development of legal rules. In Jindal Iron and Steel Co. Ltd v Islamic Solidarity Shipping Co. Jordan Inc (2004) the House of Lords was invited to overrule itself using the Practise Direction but it declined to overturn a 1957 precedent, because it had stood for 50 years, had worked and had not produced unfair results and an enormous number of transactions had taken place assuming it was the law. This is a perfect example of judges' creation limits. The first major use of the Direction was in the case of British Railways Board v Herrington (1972). In this case the House of Lords overruled a previous decision that stated that occupiers do not owe a duty of care to child trespassers. The House of Lords is reluctant to use the Practise Direction with regard to criminal cases, as it believes there is a special need for certainty in criminal cases. These means of creation possibilities within the system of judicial precedent provide a firm, legal support to the law, adding some flexibility where it is needed. Rebecca Turner Assignment 2.2 08/04/2009 ...read more.