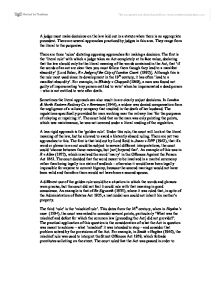 A judge must make decisions on the law laid out in a statute when there is no appropriate precedent. There are several approaches practiced by judges in this area. They range from the literal to the purposive. There are three 'rules' dictating opposing approaches for making a decision. The first is the 'literal rule' with which a judge takes an Act completely at its face value, declaring that the law should only be the literal meaning of the words contained in the Act, that 'if the words of an act are clear then you must follow them though they lead to a manifest absurdity' [Lord Esher, R v Judge of the City of London Court (1892)]. Although this is the rule most used since its development in the 19th century, it has often 'lead to a manifest absurdity'. For example, in Whitely v Chappell (1868), a man was found not guilty of impersonating 'any person entitled to vote' when he impersonated a dead person - who is not entitled to vote after death. Sometimes the literal approach can also result in are clearly unjust decisions. ...read more.

The practical application of this question is the consideration of what the Act in question was meant to achieve - what 'mischief' it was intended to stop - and consider that problem solved by the provisions of the Act. For example, in Smith v Hughes (1960), the mischief rule was used to interpret the Street Offences Act 1959, which forbade prostitutes soliciting on the street. The court ruled that the Act was passed in order to 'clean up the streets' and thus covered prostitutes who solicited form balconies, doorways and open windows, and who therefore had the same effect as those actually in the street. Thus a judge using the 'mischief rule' is interpreting what he feels that intention of Parliament was in the law by using a method of analysing the preceding legislation. Although this rule carries with it a risk of judicial law-making, the Law Commission in 1969 recommended that it became the sole method of interpreting legislation. The purposive approach goes even further than the mischief rule. The judges take it upon themselves to decide what Parliament meant in passing a law. ...read more.

Noscitur a sociius is a third language rule, which dictates that the context of a word both within the section and within the rest of the act must be considered. In Inland Revenue Commissioners v Frere (1965), the court decided that 'interest' referred to annual interest, due to the use of the word 'annual' later in the sentence. Certain presumptions are made by judges unless specifically contradicted by the statute. The judge assumes that common law will apply - in Leach v R (1912) the court assumed that the common law tradition that a wife could not be compelled to speak against her husband applied. This was not explicitly contradicted by the Criminal Evidence Act 1898. The judge also assumes that mens rea is required to be proven for all criminal cases. In Sweet v Parsely (1970) the court held that although the defendant was 'concerned with the management' of premises on which people had smoked cannabis, she had rented it out and was unaware of the illegal activities. The Act did not specify that mens rea need not be present. Two other assumptions judges make are that the Crown is not bound by any statute unless the statute expressly says so, and that legislation does not apply retrospectively. ...read more.