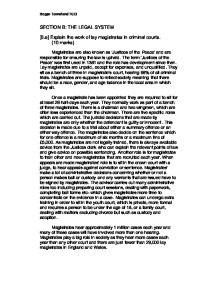 SECTION B: THE LEGAL SYSTEM

Magistrates are also known as ‘Justices of the Peace’ and are responsible for ensuring the law is upheld. The term ‘Justices of the Peace’ was first used in 1361 and the role has development since then. Lay magistrates are unpaid, except for expenses, and unqualified. They sit as a bench of three in magistrate’s court, hearing 96% of all criminal trials. Magistrates are suppose to reflect society meaning that there should be a race, gender, and age balance in the local area in which they sit.

Once a magistrate has been appointed they are required to sit for at least 26 half-days each year. They normally work as part of a bench of three magistrates. There is a chairman and two wingmen, which are often less experienced than the chairman. There are five specific roles which are carried out. The judicial decisions that are made by magistrates are only whether the defendant is guilty or innocent. This decision is made due to a trial about either a summary offence or an either way offence. The magistrates also decide on the sentence which for one offence is a maximum of six months or a maximum fine of £5,000. As magistrates are not legally trained, there is always available advice from the Justices clerk who can explain the relevant points of law and give advice on possible sentencing. Another role is for magistrates to train other and new magistrates that are recruited each year. When appeals are made magistrates’ role is to sit in the crown court with a judge, to hear appeals against conviction or sentence. Magistrates' make a lot of administrative decisions concerning whether or not a person makes bail or custody and any warrants that are issued have to be signed by magistrates. The advisor carries out many administrative roles too including preparing court sessions, dealing with paperwork, completing bail forms etc- which gives magistrates more time to concentrate on the evidence in a case. Magistrates can undergo extra training in order to sit in the youth court, which is private, more formal and requires a person to be under the age of 18, or a family court, dealing with matters excluding divorce but such as custody and adoption.

Magistrates hear approximately 1 million cases each year and many of these cases will have involved more than one hearing. Magistrates play a big role in society as they hear more cases each year than any other court and there are just fewer than 29,000 lay magistrates in England and Wales.

The jury offers to the defendant the opportunity of being tried by his peers. The role of a jury can be seen as simply to return a verdict of guilty or not guilty be determining the facts. All 12 jurors should reach the same verdict, but a majority verdict can be accepted by the judge when all of the juror cannot agree. In this situation at least ten of the jurors have to agree. The jury is independent and should be free from bias.

When the individual juror arrives at court, he goes to the assembly area. This is a room in the courthouse where jurors have to check in at the start of their service and have their identity checked. All the potential jurors are shown a DVD explaining their role as a juror and what happens in a courtroom. When a court is ready to select a jury, a court official chooses a group of people at random.

The average trial lasts for about a day and a half and people may be called to sit on more than one trial. Juries will listen to the evidence presented and see the exhibits, such as; items involved in the crime, photographs, CCTV images and diagrams. The jury may take notes, but the notes can only be used in the court room and the jury room. At the end of every trail the notes will be destroyed, as the whole process of deliberation is supposed to be a secret.

Once all the evidence has been completed and the lawyers have finished their speeches, the judge will sum up the case to the jury and explain the relevant law. The jury would then retire to the jury room to consider/decide their verdict based on the trial and notes made in the trial. Once a unanimous verdict is reached, or a majority if jurors cant all agree on the same verdict, then the verdict will be returned and the jurors may go home.

An advantage of using a jury in the criminal justice system compared to using qualified authorities is that juries are more representative of the public. The option of being tried by peers is seen as a good and a bad thing, more so good because the verdict given is not from a qualified judge but from ordinary members of the public. This reinforces the view that the criminal justice system serves society as a whole. As very few people understand what it is to be a juror their views and willingness to serve on a jury is either ‘reluctant’ or ‘very reluctant’. To be a juror you have to be an ordinary member of the public and there is no specific knowledge required which means that a person being tried, is being tried by people that may not have any knowledge about the law but are simply looking at the facts. This also supports the ‘Human Rights Act 1998’ which states that everyone is entitled to a fair trial and trial by jury is defiantly fair as a jury consist of 12, ordinary, unqualified people, whereas trial by judge is just a verdict given by one, qualified, paid person who could be a number of things such as; bias, racist etc-.

Another advantage of using a jury is that they may sometimes come to a perverse verdict. The concept of a perverse verdict is one that pervades the Criminal Justice System of nearly all common law jurisdictions. The English Criminal Justice System is no exception and the concept has become institutionalised as if it were a true occurrence. In R V Kronlid (1996) three women broke into a British Aerospace Factory and caused over £1.5 million worth of damage to a hawk fighter plane. The women admitted it leaving a video explaining their actions. Under S.3 of the Criminal Law Act 1967, it states that it is lawful to commit a crime in order to prevent another (usually more serious). The jury found all three women not guilty even though the evidence clearly showed they caused all of the damage. Their defence was that 1/3 of the population of East Timor had been killed and the plane was likely to be used to attack the survivors. This is an example of jury equity.

Juries also add certainty to the law. Since a jury give a general verdict there is no opportunity for misinterpretation. A jury gives a verdict of guilty or not guilty based on all of the evidence they have listened to, their notes, the facts and the judges’ final speech/sum up of the facts and relevant law. Consequently, the decision is not open to dispute.

A disadvantage with using a jury is that they do not give reasoned verdicts, which does speed up the process and reinforces secrecy, but it means that individual jurors can give their verdicts based on what ever they like. A verdict could also be reached by some jurors ‘going with the flow’ in order to finish the trial and go home.

Another disadvantage of using juries is the effect it may have on them. The experience can be very distressing and hard to cope with in horrific cases, especially if the case is similar to a personal experience. Some jurors may not feel distressed until some time after the trial and if they do seek help from someone such as; a Samaritan, they are only able to talk about their feelings and emotions but not about the deliberating in the jury room.

Juries are also suggested not to be representative of the public as many people are excluded or ineligible. It is likely that most of the jury will consist of older people as mothers of young children are often excused and most people with relevant criminal convictions are under the age of 25.