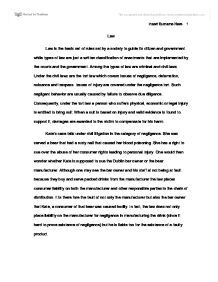 Kates case falls under civil litigation in the category of negligence. She was served a beer that had a rusty nail that caused her blood poisoning .She has a right to sue over the abuse of her consumer rights leading to personal Injury.

Law is the basic set of rules set by a society to guide its citizen and government while types of law are just a written classification of enactments that are implemented by the courts and the government. Among the types of law are criminal and civil laws. Under the civil laws are the tort law which covers issues of negligence, defamation, nuisance and trespass. Issues of Injury are covered under the negligence tort. Such negligent behavior are usually caused by failure to observe due diligence. Consequently, under the tort law a person who suffers physical, economic or legal injury is entitled to bring suit. When a suit is based on injury and valid evidence is found to support it, damages are awarded to the victim to compensate for his harm.

Kate’s case falls under civil litigation in the category of negligence. She was served a beer that had a rusty nail that caused her blood poisoning .She has a right to sue over the abuse of her consumer rights leading to personal Injury. One would then wonder whether Kate is supposed to sue the Dublin bar owner or the beer manufacturer. Although one may see the bar owner and his staff at not being at fault because they buy and serve packed drinks from the manufacturer the law places consumer liability on both the manufacturer and other responsible parties in the chain of distribution. It is there fore the fault of not only the manufacturer but also the bar owner that Kate, a consumer of that beer was caused bodily. In fact, the law does not only place liability on the manufacturer for negligence in manufacturing the drink (since it hard to prove existence of negligence) but he is liable too for the existence of a faulty product.

Product liability can be demanded from any manufacturer or retailer of a product that has caused bodily damage. In most cases strict liability claims have limited the possible defense against a product liability claim since the liability policy holds that manufacturers and distributors shall not be allowed to escape liability for faulty drinks just because there didn’t exist a previous contract with the consumer. It also states that that a consumer should be protected from harmful products and the manufacturers and other parties in the distribution chain are in a better position to compensate a plaintiff.

In theory therefore Kate has a strong case against the Dublin bar and the manufacturers since they are legally liable to her. In practice however she may be faced with the challenge of lodging a case against a strong opponent who is willing to do anything to defend their reputation. The beer manufacturer and the famous Dublin bar might choose to engage her in the suit especially if they hope to find loop holes in her case. For Instance can she produce medical prove that her sickness was caused by that rusty nail that was found in the drink she took? How can she prove that the nail came from her drink? Does she have the forensic evidence to prove the specific bottle of beer that she took? The defense will be willing to do anything to seek legal protection by demanding evidence that might be lacking from Kate’s side. Lack of enough forensic evidence might hamper Kate’s case.

The litigations of cases surrounding product liability is toady advised by the “Donoghue v Stevenson case” (1932) that forever changed the legal history. In this case famously known as the “Paisley snail” case, Donoghue shared a ginger beer with a friend only for them to find a decomposing snail in it. Just like Kate who hadn’t bought the beer for herself Donoghue friend had bought the beer. In her case she sued Stevenson, an aerated water manufacture in Paisley for 500 pounds as damages for stomach pains sustained as a result of drinking the ginger beer. Although the full details of the case are unknown since it was later settled out of court in its further progression the on April 1929 the case was dismissed on claims of lack of contractual relationship between Donoghue and Stevenson. She appealed to the house of lords and in a   judgement delivered by lord on 26 May 1932, the principle of “neighbor “was invoked in Donoghue defense where Atkin used Luke 10 to argue that human beings had a duty to conduct themselves in such a manner that wouldn’t harm anyone especially if one has the power to prevent that harm. The case was referred back to the courts and Stevenson died before the final judgement and so Donoghue had to settle out of court for less money. However, later in 1930 the Atkin principle of “neighbor” was adopted in to the law by the House of Lords as articulated in the “Caparo industries plc v Dickman” case. This set precedence for giving protection to even consumers that have no contractual relationship with the seller.

Back to Kate, we have identified that she had no contractual relationship with the Dublin bar and so she will have to depend on the existing product liability laws on consumer protection and the precedent judgement on product liability to make her case. However, since the plaintiff’s success in Caparro Industries plc v Dickman, there has been much other successful litigation in Ireland though we may never be able to tell what they are costing the companies. Most of other people however usually choose to settle outside the court using other dispute resolution methods. For instance, if she doesn’t have money for suing or if her evidence has been interfered with, she may choose to opt for a settlement which she considers commensurate to her injuries. This kind of arrangement will usually not require a neutral party like a judge or even formal rules and in most cases it will not incur any cost to either the defendant or the plaintiff.

She may also have the option of arbitration. This is if she feels that the defendant had a contractual obligation for her safety but she doesn’t want to sue. In this option she and the defence will have to select an arbitrator they are both comfortable with. The option is guided by rules provided for by the consumer liability contract laws. They will be required to give their evidence to the arbitrator from which he will make his decision. The challenge to this method is that the arbitrator’s decision is final and it doesn’t give room for appeal. Like negotiation, this method is cost effective.

In conclusion, Kate’s options will be based on how strong her case is in terms of evidence and whether she is willing to under go the court process. Although suing might give her a huge settlement, she will also be required to give a substantial evidence for her injuries. Negotiation or arbitration may end up giving her a settlement that is lesser than what the court may give her but the process will have less expenses and hustle.