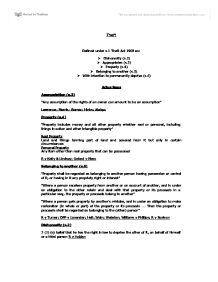 Theft Defined under s.1 Theft Act 1968 as: > Dishonestly (s.2) > Appropriates (s.3) > Property (s.4) > Belonging to another (s.5) > With intention to permanently deprive (s.6) Actus Reus Appropriation (s.3) "Any assumption of the rights of an owner can amount to be an assumption" Lawrence; Morris; Gomez; Hinks; Atakpu Property (s.4) "Property includes money and all other property whether real or personal, including things in action and other intangible property" Real Property Land and things forming part of land and severed from it but only in certain circumstances Personal Property Any item other than real property that can be possessed R v Kelly & Lindsay; Oxford v Moss Belonging to another (s.5) "Property shall be regarded as belonging to another person having possession or control of it, or having in it any propriety right or interest" "Where a person receives property from another or on account of another, and is under an obligation to the other retain and deal with that property or its proceeds in a particular way, the property or proceeds belong to another" "Where a person gets property by another's mistake, and is under an obligation to make restoration (in whole or part) of the property or its proceeds .... Then the property or proceeds shall be regarded as belonging to the (other) person" R v Turner; DPP v Lavender; Hall; Wain; Webster; Williams v Phillips; R v Rostron Dishonestly (s.2) 2 (1) (a) belief that he has the right in law to deprive the other of it, on behalf of himself or a third person R v Holden 2 (1) (b) beliefs that he would have the others consent if the other knew of the appropriation and the circumstances of it 2 (1) (c) belief that the person whom the property belongs to cannot be discovered by taking reasonable steps R v Small The Ghosh Test 1) ...read more.

not including mushrooms growing wild on any land or flowers, fruit or foliage of a plant growing wild on any land. Belonging to another 10. (2) Property shall be treated for the purposes of this Act as belonging to any person - (a) having the custody or control of it; (b) having in it any proprietary right or interest (not being an equitable interest arising only from an agreement to transfer or grant an interest); or (c) having a charge on it. The term 'belonging to another' has a similar definition to section 4 Theft Act 1968 which says: "Property shall be regarded as belonging to any person having possession or control of it, or having a proprietary right or interest." This brings concepts of civil law into the determination of rights in property R v Smith Mens Rea The mens rea for criminal damage is: > Intention Or > Recklessness R v G Intention - The defendant must intend (aim or purpose) to destroy or damage property belonging to another "It is not enough that D intended to do the act which caused the damage unless he intended to cause that damage; proof that D intended to throw a stone is not proof that he intended to break a window. Nor is it enough that D intends to damage property if he does not intended to damage [the] property of another." R .v. Pembliton Smith & Hogan's Criminal Law, 11th Edition, page 879 Since R .v. R & G, abolished the Caldwell objective test there has only been one type of Recklessness in Criminal Damage - Subjective Recklessness The Defendant is reckless if: He is aware of a risk and in the circumstances known to him it is unreasonable to take the risk. Elliott v C; R v G; R v Stephenson; R v Cooper; R v Castle; Special Defences S5(2)(a) states that a person will be regarded as having a lawful excuse if at the time of the act or acts alleged ...read more.

> Dishonestly R v Widdowson Defences Self Defence - General Defence, Complete Acquittal. Largely codified in S.76 Criminal Justice and Immigration Act 2008. Necessary Force: - Need not show unwillingness to fight (Bird) - Danger must be sufficiently imminent and of a nature to justify the use of force - Need not be attacked first (Beckford - Pre-emptive) - If threat has passed the force is not necessary (Clegg) - Not necessary if they are retreating (Martin) - D may act in contrary to law to defend himself (AG Ref. No 2 of 1983) Reasonable Force:- Reasonable in the circumstances as the D believed them to be (objective) - If they make a mistake, it is whether the force was objectively reasonable in circumstances as they honestly believed them to be (Gladstone) - If it is objectively obsessive, even if the D thought was reasonable the defence fails (Owino) - Response must be proportionate to the threat (Palmer) "Cannot weigh nicety to exact measure of his defensive action" - Clegg and Martin can be used as measure of reasonableness of the force used Intoxication - General defence --> complete acquittal. Voluntary Intoxication:- Majewski - Defence to only specific intent crimes. If basic intent then they are reckless in drinking. (Confirmed in Lipman) Dutch Courage - Fails (Gallagher) Drunken Mistake - Cannot rely on defence of mistake (O'Grady/Hatton) Richardson + Irwin - If they would not have realized the risk will sober; it is a defence to basic intent. (Jury Q - Limited Application) Involuntary Intoxication: Defence to basic and specific intent, has to be shown D had no MR. Hardie: Drugs not liable to cause unpredictably and aggressiveness have a defence Kingston: Intoxicated intent is still intent Allen - Intoxication must be completely invol. Not knowing the strength is not enough. Bailey: If you know there will be adverse reaction to a drug, cannot rely on defence Ross v Lord Advocate: Complete involuntary intoxication Eatch: If one intoxicant is added to another it is up to jury whether their intoxicated state was due solely to voluntary intoxication ...read more.