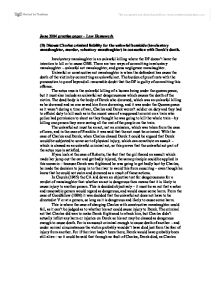 June 2004 practise paper - Law Homework (B) Discuss Charles criminal liability for the unlawful homicide (involuntary manslaughter, murder, voluntary manslaughter) in connection with Derek's death. Involuntary manslaughter is an unlawful killing where the DF doesn't have the intention to kill or to cause GBH. There are two ways of committing involuntary manslaughter - unlawful act manslaughter, and gross negligence manslaughter. Unlawful or constructive act manslaughter is when the defendant has cause the death of the victim by committing an unlawful act. The burden of proof rests with the prosecution to proof beyond all reasonable doubt that the DF is guilty of committing this offence. The actus reus is the unlawful killing of a human being under the queens peace, but it must also include an unlawful act dangerousness which causes the death of the victim. The dead body is the body of Derek who drowned, which was an unlawful killing as he drowned and no one saved him from drowning, and it was under the Queens peace as it wasn't during a time of war, Charles and Derek weren't soldier on duty and they had to official duty to kill such as in the recent case of a supposed terrorist on a train who police had permission to shoot as they thought he was going to kill the whole train - by killing one person they were saving all the rest of the people on the train. ...read more.

that through no fault of Charles, Derek died, as Charles actions weren't sufficiently dangerous enough to say that foresight of death was virtually certain from the assault. To prove that the act caused the death, we must however prove it in both fact and law before looking at whether it is the most likely offence for Charles to be charged with. To find if the unlawful act caused the death in law, the but for test must be used. But for Charles chasing after Derek and making Derek frightened, Derek wouldn't have jumped in to the river. However, to find the causation in law, Charles actions must be a more than minimal but not substaintial cause of Dereks death. However, it wasn't the chase that caused Derek's death - it was the fact that Charles saw Derek drowning and failed to act to saw him was the contributing factor of the death as he realised Derek couldn't swim but failed to act. So Charles omission to help prevent Derek from drowning was the guilty act, as it was Charles duty to prevent Derek from drowning as Charles knew that Derek couldn't swim from the fact that he was struggling to stay afloat, and Charles put him in that position by making Derek anticipate an attack and shouting at him. So the main fault here was an omission which in involuntary manslaughter is more useful in gross negligence. ...read more.

For duty to be completely satisfied, the three stage test from Caparo and Dickman. The three stages are: * Reasonable foreseeability * Proximity * Is it just fair and reasonable to impose a duty of care? With the case of Derek jumping in to the river, it is reasonably foreseeable that he would jump in to the river to prevent any harm from Charles - as he is anticipating violence from Charles, as the only thing to stop him getting hurt by Charles is jumping in to the river. This make is reasonably foreseeable, as even though he cannot swim, it may have been shallow enough for him to wade across - it is a risk that has to be weighed up. The duty of care is reasonably foreseeable, as Derek cannot swim, and by jumping in to a river that he has no idea how deep it is means that he is going to need some assistance if he wanted to get out - he wont be safe if he wants to survive. To impose a duty of care the fact that Charles spectates him drowning instit For murder to be satisfied, there must be an unlawful killing of a human being under the queens peace. There has been a killing, with Derek drowning, but to say it was unlawful can be debatable as does jumping in to a river in fear of some one else make that other person a murderer? ...read more.