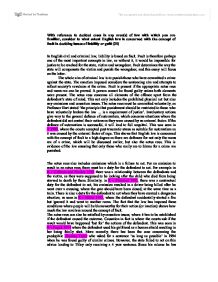 With reference to decided cases in any area(s) of law with which you are familiar, consider to what extent English law is concerned with the concept of fault in deciding issues of liability or guilt (30) In English civil and criminal law, liability is based on fault. Fault is therefore perhaps one of the most important concepts in law, as without it, it would be impossible for justice to be reached for the state, victim and wrongdoer. Fault determines the way the state will compensate the victim and punish the wrongdoer, and this essay will focus on the latter. The whole aim of criminal law is to punish those who have committed a crime against the state. The sanction imposed considers the sentencing aim and attempts to reflect society's revulsion at the crime. Fault is present if the appropriate actus reus and mens rea can be proved. A person cannot be found guilty unless both elements were present. The actus reus concerns all elements of the offence apart from the defendant's state of mind. This not only includes the prohibited physical act but also any omissions and causation issues. The actus reus must be committed voluntarily, as Professor Hart stated 'the principle that punishment should be restricted to those who have voluntarily broken the law ... is a requirement of justice'. ...read more.

It can be asked then, if the victims in this case would have suffered their horrific situations 'but for' the actions of the courts. The answer is most likely to be 'no' and going by this, the courts are at fault. Obviously, they will not be punished and it can be argued that it is the courts themselves that have brought about many miscarriages of justice and do not face any sanction for it. However, from causation in law perspective, where the defendant's actions must be a significant contribution to the outcome, there must be no intervening act, and if there is the defendant will escape liability. Looking at the same case, the courts would not be a fault as Titley's actions would have been enough to break the chain of causation. This highlights the fact that a defendant found to be at fault in factual causation could escape liability in the legal causation. It could be argued that if the law was so concerned with the concept of fault, there would not be any contradictions in it policies. Although it is the law that for fault to be found the actus reus and mens rea must be present, there is an exception to the rule where strict liability cases are concerned. Strict liability refers to cases where it is not necessary to have the mens rea to commit a crime. ...read more.

However, the law has since developed and provocation now recognises 'battered woman's syndrome' and the slow burn effect it may cause. If this is the case, then surely a defendant in such a situation cannot face the full wrath of 'fault' when much of what surrounded the killing was not out of their choice. Even though the actus reus and mens rea in this case, and also similar cases of R v Duffy 1949 and R v Thornton 1992, were present, the law's introduction of a Domestic Violence Bill is perhaps confirmation that the concept of fault can only be appropriately applied when the full circumstances are looked at. This signifies the importance of defences, as it is here that the law can decide whether or not a person is to blame for their actions and to what extent it was their fault that the actus reus and mens rea were present. To conclude, English law is concerned with the concept of law to the fullest extent, as this is the only way justice can be achieved. Fault is not as difficult to prove as one would expect with the several areas of actus reus and mens rea that exist. The introduction of defences may mean that those at fault could escape liability, but ultimately these are safeguards for those who deserve their circumstances to be taken into consideration, and as justice is the whole aim of English law, this is only fair. ...read more.

A good essay. The student would benefit from having read some of the academic commentary on the issue of fault, and by broadening the focus beyond criminal law.
4 Stars.