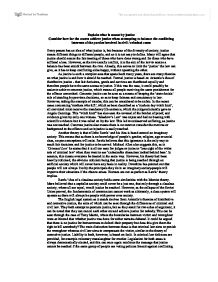 Explain what is meant by justice

Every person has an idea of what justice is, but because of the diversity of society, justice means different things to different people, and so it is not easy to define. Many will agree that justice should ensure the fair treating of those who have done wrong and for those who have suffered a loss. However, as the two usually conflict, it is the aim of the law to ensure a balance has been struck between the two. Already, this serves to limit the ‘justice’ the law can give, as it has to keep conflicting sides happy, without upsetting the other.

As justice is such a complex area that spans back many years, there are many theories on what justice is and how it should be reached. Formal justice is based on Aristotle’s idea of distributive justice - that fair decisions, goods and services are distributed equally and therefore people have the same access to justice. If this was the case, it could possibly be easier to achieve concrete justice, which means all people receiving the same punishment for the offence committed. Concrete justice can be seen as a means of keeping the ‘stare decisis’ rule of standing by previous decisions, so as to keep fairness and consistency in law. However, taking the example of murder, this can be considered to be unfair. In the recent cases concerning ‘mothers who kill’, which as been described as a ‘modern day witch hunt’, all convicted must receive the mandatory life sentence, which the judge reluctantly gave to Angela Cannings. This “witch hunt” has also seen the reversal of the burden of proof, and evidence given by only one witness. ‘Meadow’s Law’ was unjust and had no bearing with scientific evidence but it was relied on by the law. This led to undeserved suffering, as justice was not reached. Concrete justice also means there is no room to consider the motives or background to the offence and so injustice is easily reached.

Another theory is that of John Rawls’ and his idea is based around an imaginary society. This means that as there is no knowledge of people’s gender, religion, age or social class, no pre-conceptions will exist. Rawls believes that this ignorance is the only way to reach fair decisions and for justice to be served. Michael Allen also suggests this, as in ‘Criminal Law’ he states thatit is all too easy for judges or juries to ‘lose sight of the wider role of criminal law’ when they want to see ‘undesirable characters locked behind bars’. In essence, this means everyone be treated in the same way. However, his theory had been heavily criticised, the obvious criticism being that justice is being reached through an artificial society which will never have any basis in reality. Dworkins has pointed out that people will not always live by the principals they do in an imaginary society-people will improve their situations if the chance arises. Humans are not as perfect as Rawls’ theory implies.

Rawls’ idea of a classless society holds some similarities with the Marxist theory. Marx believed that a capitalist society could never be a just one, that only through a classless society, where all are equal, would justice be reached. However, as the collapse of the Soviet Union proved, the fundamentals of communism cannot work as ultimately, a class system will operate as there will always be people with power over society.

The English legal system as it stands derives from Aristotle’s theories of distributive and corrective justice, the aims of which can be seen through the differences of criminal and civil law. They both attempt to promote justice, but as they stand for two sides of argument, it can be noted that they can cancel each other out and achieve justice for nobody. This can be seen through the case of Tony Martin, where the boundaries between victim and wrongdoer were so blurred that whether justice was done for either remains debated. It could be argued that there is no justice for homeowners to defend their property but does this give them the right to kill somebody? The main distinction between these is that criminal law aims to punish the wrongdoer whereas civil law aims to compensate the victim, similar to the theory of corrective justice. Liability in both, however, is based on fault. In criminal law defences are provided, for example voluntary manslaughter for murder. Legislation for both areas is always democratically elected, and this can once again reinforce the message that justice cannot be reached if the same group of people are voting policies for and against conflicting parties. This can be seen through the Access to Justice Act 1999, which provides legal funding advice and representation in both civil and criminal matters. The state is providing the civil help through the Legal Services Commission and criminal assistance through the Criminal Defence Service. This may seem odd, as ‘Access to Justice’ seems to imply that there will be more a stance towards one side than the other, as this may be the only way justice can be reached. Lord Justice Darling once stated that ‘the law courts of England are open to all men like the doors of the Ritz hotel’. This means that only as long as people have the money will they be treated equally. The Access to Justice Act is an example of this, as if you are on a modest income, the law will not provide for you. This means only the wealthy or very poor will be catered for in this Act and so detracts from the promotion of justice of courts and juries being open to all. The alternatives to this Act do not appear to give a high quality of legal help; the Citizens Advice Bureau cannot give specific legal advice and even though ‘Accident Helplines’ provide help on a ‘no win no fee’ basis, a successful claim could see 25% of the damages awarded going to the lawyer. More recently, there has been the introduction of the controversial Criminal Justice Act 2003, which John Wadham has described as ‘a shameful attack on justice’, perhaps  because the whole aim of the Act is to ‘strike the right balance between justice for victims and the rights of those on trial’, as stated by David Blunkett. Although the scrapping of the double jeopardy rule and the revealing of a defendant’s relevant previous convictions are amongst aspects hoping to assist victims of crime, the idea of reducing the rights of the defendant to benefit the victim had been described as ‘fundamentally flawed’ as it does not address the issue of improving justice. It can also be said that by revealing previous convictions of the defendant is taking away the justice they need, especially as it may undermine the ‘innocent until proven guilty’ clause. Even the supposedly stable promotion of justice of judges being independent and free from political bias seems to be disappearing as the Crime (Sentences) Act 1997 gives minimum sentences in certain circumstances. Such legislation limits judges’ freedom. It can be argued that judges being in charge of sentencing can lead to inconsistent punishments, but the doctrine of judicial precedent often ensures that decisions are fair and in keeping with previous cases. This does not mean that unjust decisions are never reached, as seen with the cot death cases discussed earlier. There have also been unwarranted decisions concerning domestic violence issues. Provocation rules that there must be ‘a sudden and temporary loss of self control’, so this may not include women who have suffered from domestic abuse for years. However, ‘Battered Woman’s Syndrome’ is recognised by the law, and the introduction of the domestic Violence Bill also aims to reach justice in such situations.

Courts often do not achieve justice and despite the introductions of Acts such as the Access to Justice Act 1999 and Criminal Justice Act 2003, it is unlikely justice will ever be reached through the courts. This is not so much because of the conflicting interests of civil and criminal parties, but perhaps because the law is meant to be a fair adjudicator and whatever it’s decisions, someone will inevitably lose out.