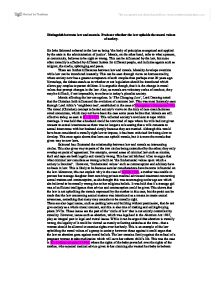 Distinguish between law and morals. Evaluate whether the law upholds the moral values of society. Sir John Salmond referred to the law as being 'the body of principles recognised and applied by the state in the administration of justice'. Morals, on the other hand, refer to what a person, or community, believes to be right or wrong. This can be influenced by the law, but more often morality is affected by different factors for different people, and includes agents such as religion, the media, upbringing and peers. There are further differences between law and morals. Morality develops overtime while law can be introduced instantly. This can be seen through views on homosexuality, where society now has a greater acceptance of such couples than perhaps even 20 years ago. Nowadays, the debate stands as to whether or not legislation should be introduced which allows gay couples to parent children. It is arguable though, that it is the change in moral values that prompt changes in the law. Also, as morals are voluntary codes of conduct, they may be difficult, if not impossible, to enforce in today's pluralist society. Morals affecting the law are ageless. In 'The Changing Law', Lord Denning noted that the Christian faith influenced the evolution of common law. This was most famously seen through Lord Atkin's 'neighbour test', established in the case of Donoghue v Stevenson 1932. The moral (Christian) concept reflected society's views on the duty of care manufacturers owed consumers, which may not have been the case some years before that. Morals are still effective today, as seen in R v R 1991. ...read more.

Those against euthanasia would believe Leslie Burke's comments to be morally right, but as the law does not yet recognise 'the right to live' in any legislation, it is not upholding the moral values of society. Although Burke's comments do not clarify the law on euthanasia one way or another, his 'right to live' campaign does stress the importance of "the patient/victim" and their wishes. As long as this is the case, it will be virtually impossible to decide the law on euthanasia by legislation, and a case-by-case basis is likely to be the only way to reach satisfactory conclusions. As the subject of law and morals is such a vast one, it is no surprise that there are several different views and theories. Perhaps the most significant is the Hart-Devlin debate; that is the libertarian approach versus the moralistic view. Professor Hart's stance on issues derives from John Stuart Mill's 'harm principle' established in On Liberty 1859. Here Mill stated that society should only intervene in an individual's freedom if this stops the individual from harming others. This led Hart to reinforce Mill's libertarian view concerning immoral but private acts in his essay 'Law, Liberty and Morality'. He argues that immoral acts do not greatly affect the integrity of society, as society does not hold the same morals. This is also the view of French sociologist Durkheim, who stated that it is impossible to find moral values that would be acceptable to all members of modern society. This ties in with Hart's belief that law and morals should be kept entirely separate, as morality is a matter of private judgement. ...read more.

However, the fact that there have been no proposals to extend the rights of same-sex couples under the Adoption and Children Act 2002, could be interpreted as the moral values of society being taken into account, after all, the view of Summerskill is not widely accepted in the country and an Act that goes against this 'morally wrong' view could cause more public outcry than is necessary. However, this has not stopped cloning, another controversial subject, being outlawed in Britain. Dr Patrick Dixon believes the law to be too liberal when it comes to cloning, and that it is all too easy for a clone to be inserted into the mother outside of Britain, only for her to give birth within the country. Dixon also states that cloning is 'all to do with the rights of the parent and nothing to do with the welfare of the child'. This is a view shared by many, as cloning is not accepted as the norm in this country but this moral view has not been enough to introduce legislation to curtail the growth of cloning. This suggests that the law does not always uphold the moral view of society, or perhaps keep up with the changing 'norms of society'. To conclude, the law does appear to uphold morals as seen through homosexual couples being unable to legally parent children, as society at the moment would consider this to be morally wrong. However, other controversial matters remain untouched by the law, as seen in euthanasia and cloning issues, and so the law does not seem to uphold morals or conflict with them. The changing views of society seem to suggest that it is the morals of society upholding the law. Without morals, the law would not appear to uphold anything. ...read more.