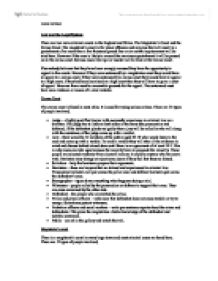 LAW AND THE LEGAL SYSTEM

Law and the Legal System There are two main criminal courts in the England and Wales. The Magistrate's Court and the Crown Court. The magistrate's court is for minor offences and any case that will result in a punishment of no more than a five thousand pound fine or six month imprisonment will be tried here. However if the case is likely to exceed the maximum punishment it will be passed on to the crown court. Serious cases like rape or murder will be tried at the Crown Court. If somebody believes that they have been wrongly accused they have the opportunity to appeal to the courts. However if they were sentenced by a magistrates court they would have to appeal to a crown court, if they were sentenced by a crown court they would have to appeal to a high court, if they had been convicted at a high court then they will have to go to a court of appeal. However there must be reasonable grounds for the appeal. The sentenced must have new evidence or reason of a clear mistake. Crown Court The crown court is found in most cities. It is used for trying serious crimes. There are 15 types of people involved; * Judge - a highly qualified lawyer with successful experience in criminal law as a barrister. The judge has to listen to both sides of the story (the prosecution and defence). ...read more.

England and Wales believe that the suspect is innocent until proven guilty so the suspect should not be kept in custody before the trial unless there is a valid reason. * Bail can be granted by either the police or CPS. If granted the suspect will be released from police custody until they are next to appear in court or at the police station. There are two types of bail; Common bail - this says that the suspect may not go within a certain distance of a witness' house or the suspect may have a curfew. Conditional bail - the police and courts can enforce conditions in interest of the protection of witnesses and to ensure that the suspect actually turns up for court. If the suspect fails to follow their bail conditions or fail to attend court they are likely to be arrested and have their bail withdrawn as it breaches their conditions. * Failure to appear in court is a prosecutable offence. It could lead to up to 12 months imprisonment. * Before going to court the defendant should decide whether to plead guilty or not guilty. * If the defendant pleads guilty the court will sentence the defendant. * If the defendant pleads not guilty a date will be set for their trial. * There maybe several court hearings for a case so the court can reach a verdict. * During the trial the prosecution will present a case and then the defendants lawyer will cross examine their evidence and present their defence. ...read more.

If you wanted to make a claim you would need to go to county court and issue a claim. You will be given a claim form to fill in. You make three copies of this form. One for yourself , one for the defendant and of course one for the court. The court will then send your claim form and a response pack to the defendant. If it all goes smoothly and your claim is admitted you will get your money. If the claim is denied then the case may have to go to court. If the case ends up going to court and you wish to proceed you must send all your paper work about your case to the court fourteen days before the court hearing. The judge may hold a preliminary hearing so he can try and get some more information about your case or if he thinks the case might get difficult in some way. The judge may try and influence the settling of your case outside of the court. The court hearing is most likely public. However you can make the hearing private if you have a good reason. County court hearings are a lot more formal than they would be in magistrates or crown courts. At the end of the hearing there is a judgement and the judge will explain the reasons for his decision. If you win the case then the moneys yours, if you lose you have to pay costs, or if you lose if you've got a really good reason you can appeal. ?? ?? ?? ?? Jamie lorimer ...read more.