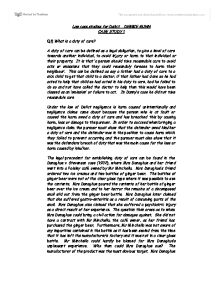 Law case studies for Delict DEBBIE GUNN CASE STUDY 1 Q1) What is a duty of care? A duty of care can be defined as a legal obligation, to give a level of care towards another individual, to avoid injury or harm to that individual or their property. It is that 'a person should take reasonable care to avoid acts or omissions that they could reasonably foresee to harm their neighbour'. This can be defined as say a father had a duty of care to a sick child to get that child to a doctor, if that father had done so he had acted to help that child so had acted in his duty to care, had he failed to do so and not have called the doctor to help then this would have been classed as an 'omission' or failure to act. In Danny's case he did not take reasonable care Under the law of Delict negligence is harm caused unintentionally and negligence claims come about because the person who is at fault or caused the harm owed a duty of care and has breached this by causing harm, loss or damage to the pursuer. In order to succeed when bringing a negligence claim the pursuer must show that the defender owed him/her a duty of care and the defender was in the position to cause harm which they failed to prevent occurring and the pursuer must also show that it was the defenders breach of duty that was the main cause for the loss or harm caused by him/her. The legal precedent for establishing duty of care can be found in the Donoghue v Stevenson case (1932), where Mrs Donoghue and her friend went into a Paisley caf� owned by Mr Minchella. Mrs Donoghue's friend ordered two ice creams and two bottles of ginger beer. The bottles of ginger beer were not of the clear glass type where it was possible to see the contents. ...read more.

to injure severely or kill persons or animals, or damage property to a material extent, the keeper of the animal is (strictly) liable for any injury or damage caused by the animal and directly referable to these physical attributes or habits". It means that if you are the owner of any animal that is covered in Section 1 of the Act and the animal causes injury or death to any other persons or animals then you will be strictly liable for the harm caused. Liability cannot be escaped by showing that you took reasonable care and negligence does not have to be shown by the pursuer. Strict liability means that you must have taken effective precautions to stop the injury occurring in the first place. (Introduction to Scots law, Wyllie & McCrossan, page 266 liability for animals) It means that if you are the owner of any animal under section 1 of Animals (Scotland) Act 1987 and your animal cause's distress, injury or death to other persons or animal then you are strictly liable for harm caused. Owner's liability for animals can be shown in the following relevant cases Burton V Moorhead (1881) this is where an extremely dangerous dog attacked the pursuer and injured him. The keeper of the animal tried to defend himself by stating that a strong chain was used for restraining purposes and this chain normally did the trick. Unfortunately the keeper's defence that he thought the chain was more that adequate to restrain the dog was simply not good enough. The keeper was fully aware of the dog's nature and with this knowledge he should have taken special precautions (not reasonable care) to make sure that the dog was prevented from harming passers-by. This case shows that if you know that your animal is of an aggressive nature then precautions above the normal should be taken so that the animal cannot harm others. ...read more.

is still very liable for skipping the green light and taking the chances as it was foreseeable that an accident may or could happen if he did this he also has a duty of care to any passengers he has on his bus so to drive through this way is pretty negligent on his part. He would still be liable for damages and causing the accident. c) If he can prove that the player did this maliciously then Gavin may win his case under intentional conduct where the player did it on purpose to cause harm to him, but the player if putting in the defence Volenti non fit injuria and there were no witnesses to this and it may in the end be that it is Gavin's word against the players and if this is the case Gavin may lose and the player will win as everyone knows rugby is a contact sport where you play it voluntarily and sustain many injuries as a result it will all come down to if Gavin can prove he did it on purpose and the player to prove he didn't and was an accident. Some relevant cases to go with other defences for the defender COMPIANCE WITH STATUTORY AUTHORITY - LORD ADVOCATE V NORTH BRITISH RAILWAYS (1894) - This was regarding waste that was being disposed of under statutory authority was left near an army barracks. Compliance with the statute could have been achieved by disposing of the waste not at the army barracks , but at another more suitable location. As a result North British railways could not use the defence against the accusation that it was causing a nuisance. DAMNUM FATALE - CALEDONIAN RAILWAY CO V GREENOCK CORPORATION (1917)- the defenders argument was that freakishly heavy rainfall in Greenock, but not for the rest of Scotland should be considered as an act of god failed to impress the House of Lords and the defender was found liable for causing damage to the pursuer's property. ...read more.