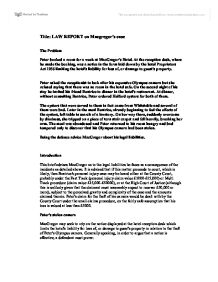 Title: LAW REPORT on Macgregor's case The Problem Peter booked a room for a week at MacGregor's Hotel. At the reception desk, where he made the booking, was a notice in the form laid down by the hotel Proprietors Act 1956 limiting the hotel's liability for loss of, or damage to guest's property. Peter asked the receptionist to look after his expensive Olympus camera but she refused saying that there was no room in the hotel safe. On the second night of his stay he invited his friend Beatrice to dinner in the hotel's restaurant. At dinner, without consulting Beatrice, Peter ordered Helford oysters for both of them. The oysters that were served to them in fact came from Whitstable and several of them were bad. Later in the meal Beatrice, already beginning to feel the effects of the oysters, left table in search of a lavatory. On her way there, suddenly overcome by dizziness, she tripped on a piece of torn stair carpet and fell heavily, breaking her arm. The meal was abandoned and Peter returned to his room hungry and bad tempered only to discover that his Olympus camera had been stolen. Being the defence advice MacGregor about his legal liabilities. Introduction This brief advises MacGregor as to the legal liabilities he faces as a consequence of the incidents as detailed above. It is advised that if this matter proceeds to court, which is likely, then Beatrice's personal injury case may be heard either at the County Court, probably under the Fast Track (personal injury claim value �1000-�15,000) ...read more.

and no plea in mitigation of contributory negligence (Sayers v Harlow Urban District Council (1958)7) would be successful in relation to the fact that Beatrice left the room in a dizzy condition. McGregor hotel took all reasonable precautions and exercised all due diligence to avoid the commission of such an offence. According to Food and Safety act 1990 section 21 subsection 3A, states that: 'The ommission of the offence was due to an act or default of another person who was not under his control or to reliance on information supplied by such a person' Regarding to that I will give an example of case Tesco Supermarkets v Nattrass 1972. To prove that MacGregor hotel is not responsible for the wrong description of the oysters. Tesco Supermarkets v Nattrass 1972. Where Tesco relied upon the defence of the 'act or omission of another person'. Tesco had a special offer on washing powder, with a poster relating to the offer displayed in the store. They ran out of the specially marked low price packets but failed to remove the poster when higher priced stock was put on the shelves and someone was overcharged. Tesco is a big company all over the UK with thousands of employees. The have managers responsible for different stores. The store manager should check the pricing and on this occasion he failed to follow their instructions. As we know McGregor is a big hotel chain all over the UK with about 1500 employees. ...read more.

Therefore, in this case Beatrice can not be blamed for carelessness because the food she had from the hotel caused her dizziness on her way to lavatory. This Act makes it clear that even though Beatrice did not make the contract with the MacGregor's restaurant, the contract was made for her benefit too. The Consumer Protection Act 1987 section 7 states that the liability of a person by virtue of this part to a person who has suffered damages caused wholly or partly by a defect in a product. Now, we can support our case with one old similar case like Donoghue v Stevenson 1993. In this case a person bought a bottle of ginger beer from the retailer and passed it on the defendant, Ms Donoghue, who drank it and became seriously ill only to find out later that the bottle contained a partially decomposed snail. The defendant went on to pursue a legal action against the manufacturer of the ginger beer. Her claim was successful on the basis that a manufacturer owes a duty of care to all those who might be expected to consume their products. Beatrice is a secretary with income of �25,000 per year. The reason why she is unable to work is the negligence of the hotel occupiers. Her medical report states that she will not be able to work for the next 3 months. The total expenses she will be suffering and its interest is �6500. Additional expenses such as cost of travel to receive medical treatment, cost of medication etc. will come extra. Considering the above facts Beatrice should receive the maximum compensation from the MacGregor Hotel. ...read more.

A good essay, written very well and quite comprehensively. Focus is duly given to core issues such as exclusion of contractual terms and occupiers' liability.