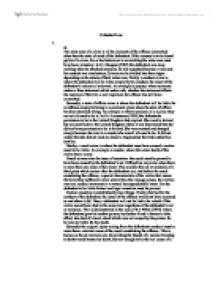 Criminal Law 1. a) The actus reus of a crime is all the elements of the offence committed other than the state of mind of the defendant. If the accused is to be found guilty of a crime, his or her behaviour in committing the actus reus must have been voluntary. In R v Burgess (1991) the defendant was sleep walking when he attacked someone, he was acquitted because it was said his conduct was involuntary. Crimes can be divided into three types depending on the nature of their actus reus. Firstly, a conduct crime is where the defendant will be liable simply by his conduct, the result of the defendant's actions is irrelevant. An example is perjury, where someone makes a false statement whilst under oath, whether the statement affects the outcome of the trial is not important, the offence has still been committed. Secondly, a state of affairs crime is where the defendant will be liable for an offence simply by being in a particular place when the state of affairs has been declared wrong. An example is where someone is in a place they are not allowed to be in. In R v Larsonneur (1933) the defendants permission to be in the United Kingdom had expired. She went to Ireland but was sent back to the United Kingdom when it was discovered that she did not have permission to be in Ireland. ...read more.

The woman's child died in the fire. Lord Lane CJ highlighted that even if death or grievous bodily harm is not the defendants aim or wish, the jury may infer intent if they decide that death or grievous bodily harm was virtually certain to occur from what the defendants did, and the defendant foresaw that this was the case. This was confirmed by the House of Lords in R v Woollin. Thirdly, subjective recklessness is where a defendant is aware of a risk and takes it where it was unreasonable to do so. In R v Cunningham (1957) the defendant broke a gas meter to steal the money in it, and gas seeped out into the house next door. The woman there was sleeping and became so ill her life was endangered. Cunningham was charged. However the Court of Appeal quashed Cunningham's conviction and laid down a two stage test for establishing whether a defendant can be said to have acted with subjective recklessness. Firstly, did the defendant foresee a risk of harm, if yes; secondly, did he take that risk regardless. To determine whether the risk-taking was unreasonable the courts will balance such factors as the seriousness of the risk and the social value of the defendants conduct. As William Wilson observed 'Jumping a traffic light is likely to be deemed reckless if actuated by a desire to get home quickly for tea but not if the desire was to get a seriously ill person to hospital. ...read more.

Secondly, the cost of precautions: In Latimer v AEC Ltd (1953) bad weather caused a factory to flood. The owners cleaned up as best as they could: sprinkling sawdust down to make it less slippery. Claimant slipped and injured his back. Court decided the factory had taken all reasonable precautions. The only other step they could have taken was to close the factory and lose productions which would be unreasonable. Thirdly, any relevant professional standards: in Nettleship v Western (1971) a learner driver hit a lamppost. The driving instructor badly injured his knee. Court held the defendant was in breach of her duty of care because she failed to drive to a reasonable standard. Fourthly, any social utility connected with the defendants actions: In Watt v Herts. CC (1954) the claimant was a fireman travelling in the back of a vehicle that was carrying heavy lifting equipment to rescue a woman trapped under a bud. The equipment was left unsecured because there was no time to secure it. The claim failed, the social usefulness justified the risk that was taken. Fifthly, any special characteristic of the claimant that the defendant was aware of: in Paris v Stepney Borough Council (1951) a one eyed welder lost his remaining eye welding. Although there was no general duty to provide goggles at the time: the court recognised more care should have been taken of Mr Paris. His disability was known to his employers. Thirdly, the defendant must prove resulting damage. ?? ?? ?? ?? ...read more.