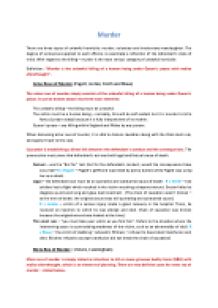 Notes on the law on murder

The prosecution must prove that defendant?s act was both legal and factual cause of death. Factual ? use the ?But for? test. But for the defendants conduct, would the consequences have occurred? R v Pagett ? Pagett?s girlfriend was killed by police bullets while Pagett was using her as a shield. Legal ? the defendants act must be an operative and substantial cause of death. R v Smith ? two soldiers had a fight which resulted in the victim receiving a bayonet wound. Doctor failed to diagnose punctured lung and gave bad treatment. (The chain of causation wasn?t broken ? at the time of death, the original wound was still operating and substantial cause.) ...read more.

(Victims refusal to accept transfusion did not break the chain of causation) Mens Rea of Murder ( Vickers, Cunningham) Mens rea of murder is simply stated as intention to kill or cause grievous bodily harm (GBH) with malice aforethought, which is an element of planning. There are two definite cases for mens rea of murder ? stated below. In Vickers, the defendant broke into a sweet shop and beat the elderly owner down. He was convicted of murder as the element of planning was there. R v Cunningham - the defendant had repeatedly struck his victim with a chair leg and the victim died. The House of Lords stated that it amounts to murder because the intention to cause ?very serious injury (GBH) was there. ...read more.