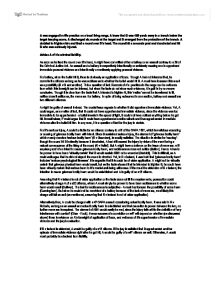 Offences Against the Person Act 1861

A was engaged in rifle practice on a local firing range. A knew that B was 400 yards away in a trench below the target keeping score. A discharged six rounds at the target and B emerged from the protection of the trench. A decided to frighten him and fired a round over B's head. The round hit a concrete post and ricocheted and hit B who was seriously injured. Advise A of his criminal liability. As soon as he fired the round over B's head, A might have committed either a battery or an assault contrary to s 39 of the Criminal Justice Act. An assault and a battery is respectively intentionally or recklessly causing one to apprehend immediate personal violence and intentionally or recklessly applying personal violence. For battery, since the bullet hit B, there is obviously an application of force. Though A had not intended that, he commits the offence as long as he was reckless as to whether the bullet would hit B. ...read more.

In any case, it is a question of fact for the jury to decide. For B's serious injury, A could be liable for an offence contrary to s18 of the OAPA 1861, which is malicious wounding or causing of grievous bodily harm with intent. Since B sustained serious injury, the element of 'grievous bodily harm' which merely denotes 'serious bodily harm' (R v Saunders), is readily satisfied. The situation is similar for 'causing': though the round hit B indirectly because it ricocheted, A had still caused the injury by virtue of the event being a natural consequence of the firing of the round (R v Hallet). But A might have a defence on the issue of mens rea. s18 requires proof of an intent to cause grievous bodily harm, and recklessness does not suffice (Belfon). Hence A has to be proven to have been 'virtually certain' that B would sustain GBH or be wounded (Nedrick). ...read more.

Alternatively then, A could be charged with s 47 OAPA assault occasioning actual bodily harm. It was said in R v Roberts, as long as an assault and actual bodily harm is established and that causation is proven between the two, no further mens rea is required. The element of ABH would easily be met, since the injury falls within the definition of 'any interference with comfort' (Chan - Fook). Hence success of a conviction on s47 will depend on whether (as discussed above) there is evidence on A's foresight of application of force, and evidence of B's apprehension of immediate violence and the jury's evaluation. If R v Ireland is extended, A would be guilty of a s18 offence. If the jury is satisfied that B apprehended another episode of immediate violence right after he got hit, A would be guilty of a s47 offence as well. Otherwise, A would most probably be absolved from liability. ...read more.