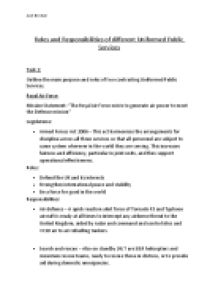 ﻿Josh Birchall Roles and Responsibilities of different Uniformed Public Services Task 1: Outline the main purpose and roles of two contrasting Uniformed Public Services. Royal Air Force Mission Statement: ?The Royal Air Force exists to generate air power to meet the Defence mission? Legislations: 1. Armed Forces Act 2006 ? This act harmonises the arrangements for discipline across all three services so that all personnel are subject to same system wherever in the world they are serving. This increases fairness and efficiency, particular in joint units, and thus support operational effectiveness. Roles: 1. Defend the UK and its interests 2. Strengthen international peace and stability 3. Be a force for good in the world Responsibilities: 1. Air defence ? A quick reaction alert force of Tornado F3 and Typhoon aircraft is ready at all times to intercept any airborne threat to the United Kingdom, aided by radar and command and control sites and VC10 air to air refuelling tankers. 1. Search and rescue ? Also on standby 24/7 are S&R helicopters and mountain rescue teams, ready to rescue those in distress, or to provide aid during domestic emergencies. 2. ...read more.

Police Force Missions Statement: ?The primary job of the British Police is to prevent, deter, detect and reduce crime within the UK territorial boundaries and in the case of certain specific crimes to protect UK nationals anywhere in the world.? Legislation: There are various acts, offences and common laws that are used by the police force. For example; 1. Police and Criminal Evidence Act 1984 ?Governs police powers 2. Police reform act 2002 ? Make the police more efficient and cost effective, increased accountability. 3. Criminal Justice and Police Act 2001 ? Disclosure of information surrounding disorder. The purpose of having these legislations is to put a society in order by creating a safer and healthier society. The roles and responsibilities of a police officer include making an initial response to incidents that take place anywhere in their area and making decisions to deal with them in the most appropriate way. Roles: 1. Police Officers (including special constables) 2. Police Community Support Officers 3. Police Staff and Volunteers Responsibilities: 1. ...read more.

5. Supporting victims ? All officers are trained to support victims of crime and to have enhanced listening skills. Some officers develop a particular empathy with victims of crime and choose to become Victim Support Officers of family liaison officers. 6. Saving lives ? This is a primary role of all police officers and they often have to save lives in demanding circumstances: this could include preventing people from committing suicide others who are trapped in burning buildings or individuals involved in fights. Every officer receives full emergency lifesaving (ELS) training and this is refreshed every six months. 7. Arresting people ? Although this is generally seen as the last resort, arresting people is an important role of the police for which full training in a variety of techniques is provided. Depriving someone of their liberty is a serious step to take. Officers are thoroughly trained in all aspects of when and where they can and should arrest offenders. 8. Major disasters ? Thankfully these are relatively rare and police officers will probably only attend three or four such incidents in their career unless they are part of a specialist unit. Major disasters of recent years have involved rail crashes, football stadium fires and flooding. ...read more.