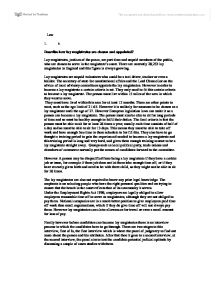 Outline the range of duties undertaken by lay magistrates. Comment on how well Lay magistrates carry out this valuable role?

1. b. Outline the range of duties undertaken by lay magistrates. Comment on how well Lay magistrates carry out this valuable role? Lay Magistrates also known as 'Lay Justices' or 'Justices of the Peace'. There are over 60,000 Lay Magistrates in England and Wales. They undertake a range of duties and are considered to be very important as 97% of court cases begin and end in the Magistrates Court. These 97% are summary trials, which are only tried in the Magistrates Court, and are minor offences. These offences are offences that are not indictable such as rape, murder, manslaughter, robbery, and GBH but are a lot less serious crimes such as driving without insurance, taking a vehicle without consent, and common assault. This is their main duty as they run the trial, decide the verdict and decide the sentences. They do this by deciding if the defendant is guilty or not guilty once hearing both parties' cases. Of the remaining 3% of all criminal cases they deal wit preliminary hearings. This will involve; remand hearings, bail applications etc. Lay magistrates are unpaid volunteers, who work in the magistrates court, but this is not there job, this is a part time job that some people take time off work to complete. Magistrates sit in magistrate's court, usually in a bench of three. ...read more.

Because of this intense training that they go though they have a good understanding of their job and the laws that they need when they finally sit down in the magistrates court. Also with the criteria that they have to meet before becoming a lay magistrate it just shows that not just anyone can do It u need people that are not villains not from another country that will be biased and not just overall biased and one sided. So on the whole the lay magistrates in the untied kingdom do a very good job. However the training of the magistrates has been criticised to be inadequate for the workload they receive. The variations in the sentences given according to locality have been subject to questions. People thought that for the workload that the magistrates have to put up with there should be harder and more vigorous training. This way magistrate will be even better and more able to give fairer sentences in the court. The magistrates were found to be inconsistent with their sentences. In 1990 it was found that you were twice as likely to go to prison in Greater Manchester than in Merseyside. This goes to show there in inconsistence thought the Britain with the lay magistrates and some can be a lot harsher than others, it is up to them what verdict they give and what sentencing. But on the whole lay magistrates do a good and professional job. ...read more.