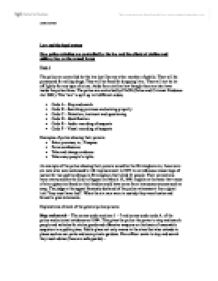 Law and the legal system

Examples of police abusing their powers:

An example of the police abusing their powers would be the Birmingham six, these were six men who were sentenced to life imprisonment in 1975 in an infamous miscarriage of justice for two pub bombings in Birmingham that killed 24 people. Their convictions were overturned by the Court of appeal on March 15, 1991 largely on the basis that traces of nitro-glycerine found on their bodies could have come from innocuous sources such as soap. The judge at the appeal famously declared of the police witnesses at the original trial “they must have lied”. When the six men were in custody they were beaten and forced to give statements.

Explanations of each of the general police powers:

Stop and search – This comes under sections 1 – 7 and comes under code A. of the police and criminal evidence act 1984. This gives the police the power to stop and search people and vehicles for stolen goods and offensive weapons on the basis of reasonable suspicion in a public place. Public place not only means in the street but also extends to places such as car parks and even private gardens. If an officer wants to stop and search they must advise (these are safe guards) –

The police must have a limit on these powers because it could start to get out of hand, because the police for example must have reasonable grounds to stop and search; they must have a good enough reason to want to search the suspect. If they didn’t then they could just go and search who ever they felt like searching and it would be unfair. This could then lead on to another issue such as racism from the police because they could search a lot of ethnic minority suspects because they may have a little suspicion about them which could get out of hand.

The officers are obliged to provide a form explaining the reason for the stop and giving contact information.

Arrest also comes under section 25 of PACE which allow the police to arrest where:

Section 25 allows the police to arrest if the arrest is reasonably believed to be necessary to protect a child or other vulnerable person, from the person who is arrested.

The rights to search an arrested person are –

Detention – When a person has been arrested and been taken to a police station. There are rules that are set out with limits on how long they may be held there. The limits are longer if the offence is more serious. There are also rules of how the detained person needs to be treated and these are set out in PACE also with the code of practice C.

The period of time the subject can be detained can go from 24 hours to a maximum of 96 hours; it depends on how serious the offence is. The detention must be reviewed by a custody officer. The custody officer must make a record of all events that happen.

There are rights of the detained person and they are –

The detained have the right to get legal advice weather it is there own solicitor or they can use the system of duty solicitors which is provided free. The senior officer can delay the right to have legal advice for up to 36 hours.

The power to search premises – The police have the power to search premises to get enough evidence for their case, the police have the power to enter a person’s premises with out their permission if the have a warrant authorising the search this will be issued by a magistrate. This is under section 8 of PACE. A warrant must specify the premises to be searched and the articles of which they want to find. Section 16 of PACE and the code of practice B set out full guide lines for executing search warrants.

The police can also enter a premise with out a warrant if it is in order to arrest a person named in an arrest warrant, or to arrest some one for an arrest able offence. This is set out in section 17 of PACE.

The IPCC stands for the Independent Police Complaints Commission, is a non departmental public body in the United Kingdom responsible for over seeing the system for handling complaints made against police forces in England and Wales. It can also elect to manage or supervise the police investigation into a particular complaint and can independently investigate the most serious cases itself.

They make sure that the complaints against the police are dealt with effectively. They set the standards for the way the police handle complaints, and when some thing has gone wrong, they help learn lessons and improve the way they work.

The CCRC stands for the Criminal cases review commission is the independent public body set up to investigate possible miscarriages of justice in England, Wales and Northern Ireland. The Commission assesses whether convictions or sentences should be referred to a court of appeal.

The Commission is an independent public body set up to review possible miscarriages of justice and decides if they should be referred to an appeal court. It was set up as a non-departmental body on 1 January 1997 and took over responsibility from the Home Office and Northern Ireland Office for reviewing suspected miscarriages of justice on 31 March 1997. The Commission has jurisdiction over criminal cases at any Magistrates’ or Crown Court in England, Wales and Northern Ireland. Our main job is to review the cases of those that feel they have been wrongly convicted of criminal offences, or unfairly sentenced. We do not consider innocence or guilt, but whether there is new evidence or argument that may cast doubt on the safety of an original decision.

Once we have completed our investigations into a case, we can refer it back to the appropriate appeal court for re-consideration.

Who else controls the police?

Courts of law – The courts that are England and Wales work with the police to help prevent crime and put the criminals with appropriate sentences.

I believe that the right balance has been struck between giving the police powers and the publics’ human rights. The police need these powers to help them to there job correctly allowing them to follow there instincts and hunches. On the other hand some police officers may take these powers they have a little too far. This is where safeguards come into play, these are there for protection and they stop the police going too far with their powers. I believe there will always be isolated cases where the police have gone to far in certain scenarios, but on the hole giving the police these powers, are helping us protect ourselves and our communities.

I think that the balance between giving the police enough powers to fulfill their role and safeguarding the rights of the public is correct. I feel this because the police have to be able to do their job to the best standards and to the best of their ability but they can only do this if they have the right tools (the powers) which help them to do so. But on the other hand the public need to be protected which is where the safe guards comes in, these are their for protection and they stop the police going over the top with the powers. So over all I think that this is a good balance I think it works well for both the police and the public, but at the end of the day it is to stop crime from happening so we should all be for the powers and the safe guards happening.