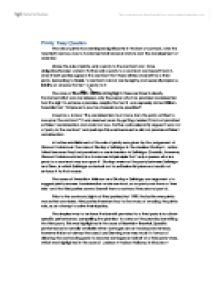 Privity. The rule of privity has developed significantly in the law of contract, over the twentieth century, due to fundamental chances in statute and the development of case law.

The rule of privity has developed significantly in the law of contract, over the twentieth century, due to fundamental chances in statute and the development of case law.

The case of Tweddle v Atkinson highlights these sentiments clearly.  Fundamentally it was considered, only the person who has provided consideration had the right to enforce a promise, despite the fact it was expressly stated William Tweddle had “full power to sue for aforesaid sums, specified”.

A further establishment of the rule of privity was given by the Judgement of Viscount Haldane in the case of Dunlop v Selfridge. In the decision Dunlop’s action failed because they had provided no consideration to Selfridge. Crucially, however, Viscount Haldane stated it is a fundamental principle that ‘only a person who is a party to a contract may sue upon it’. Dunlop were not the party between Selfridge and Dew, in which Selfridge undertook not to sell below list price and could not enforce it for that reason.

The cases of Tweddle v Atkinson and Dunlop v Selfridge, are arguments to suggest privity ensures ‘consideration under contract, so no party can have a ‘free ride’ and the third parties cannot benefit from a contract they are not part of.

Prior to the contracts (rights of third parties) Act 1999, the battle over privity was rather one-sided, third parties therefore had to find ways of evading the privity rule, as an attempt to solve their injustice.

The simplest way to enforce the benefit provided to a third party is to obtain specific performance, compelling the promisor to carry out the promise, benefiting the third party. This was highlighted in the case of Beswick v Beswick. Specific performance is normally available when damages are an inadequate remedy; however this is not always the case. Lord Denning was very much in favour of allowing the contracting party to recover damages on behalf of a third party’s loss, which was highlighted in the case of Jackson v Horizon Holidays. In Moodar v Wimpy, the HOL took a different view making clear there was no general rule allowing a contracting party to recover damages on behalf on a third party’s loss. It is also recognised an exception in constitution contracts where the building will pass to a third party who are likely to suffer loss if there are defects, as seen in the case of (Linden gardens). However this exception is not needed and therefore will not apply where the third party had a separate remedy directly against the promisor, McAlpine and Panatown.

There are further actions around privity adverse to the rights of only the contracting parties as in Tweddelle v Atkinson and Dunlop v Selfridge, these directly apply rights to a third party. These are Agency, an agent will direct contractual relationship between a third party and his principle, acting on his Authority. Assignments. Collateral contracts, the use of this concept to evade privity are well illustrated by the case of Shanklin Pier v Detel, referring to existing duties to a third party. ‘Trust of promise’ is not generally used but is sometimes the case in shipping, Les Affreteurs Remis V Walford. Bills of exchange. Specific statutory exceptions to privity i.e. Road Traffic Act 1988 and actions in Tort, White v Jones provide exceptions to the rule of privity; however, they do not normally amount to enforcing a contract.

The main criticisms of privity are; it is unfair that a party is able to get away from making a promise to pay, receiving a benefit, and then not paying up. It could be argued the doctrine of privity contradicts the principle of freedom of contract, if anyone can choose to make whatever contracts they may, why is the third party so restricted where privity is concerned.

As stated by Trettle, the battle over privity finally came to head in the Contracts Right of Third Party Act. The courts no longer need to get around the doctrine of privity; however the act does not abolish the rule of privity.

The act creates two situations where a third party can sue to enforce a contractual term. !It is based on the intentions of the parties that the third parties should be able to sue another expressly, (S.1.a) or as presumed from the fact of the inclusion of a term benefitting the third party. (s.1.b) These terms are enforceable by third parties. Further, the act states parties can exclude the inclusion of this act in their contract, so the common law and the statutory exception will still apply where the act has been excluded.

The privity rule performs a necessary function in contract, but can also work so as to create injustice. However, developments in the new century have largely receded the possibility of the privity rule operating unjustly. Although there are some contracts to which the act is inapplicable. The full effects of the act are still to be seen, especially its impact on common law. However, development in common law and statute most certainly seen a progressive solution to the, ‘battle of privity’.