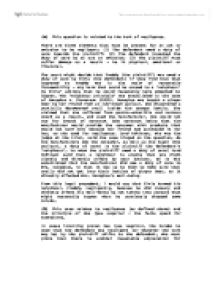 Questions related to the tort of negligence.

(A) This question is related to the tort of negligence. There are three elements that must be present for an act or omission to be negligent; (1) The defendant owed a duty of care towards the plaintiff; (2) The defendant breached the duty of care by an act or omission; (3) The plaintiff must suffer damage as a result - be it physical, emotional or financial. The court might decide that Freddy (the plaintiff) was owed a duty of care by Elvis (the defendant) if they find that what happened to Freddy was in the realm of reasonable forseeability - any harm that could be caused to a 'neighbour' by Elvis' actions that he could reasonably have expected to happen. The 'neighbour principle' was established in the case of Donoghue v. Stevenson (1932). Donoghue was bought a ginger beer by her friend from an ice-cream parlour. She discovered a partially decomposed snail inside the opaque bottle. She claimed that she suffered from gastro-enteritis and nervous shock as a result, and sued the manufacturer. She could not sue for breach of contract (the contract being that the manufacturer would provide the consumer with products that would not harm her) because her friend had purchased it for her, so she sued for negligence. Lord Atkinson, who was the judge at the trial, said the case hinged on the question, do the manufacturers owe the consumer, as well as the buyer (the parlour), a duty of care? ...read more.

A plaintiff was found to be contributorily negligent in the case of Sayers v. Harlow UDC (1958). A woman became trapped in a public toilet, and after calling for help attempted to climb out. She fell and was injured. The court found her to be 25% responsible for her accident, and Harlow UDC to be 75% responsible, so they only awarded 75% of the damages she would normally have received. Freddy may have been partially the cause of his injury, in that he was not wearing a hard hat on the building site when he was required to. Freddy may have been contributorily negligent in causing his injury, although it would be up to the court to decide exactly how much of it was his fault. (D) (I) This question relates to negligence (defined above), the principle of vicarious liability, and the principle of occupier's liability. Vicarious liability is where an one person is responsible for the torts of another (although the other is liable also) - in this case, the employer being liable for the torts of the employee. For a company to be vicariously liable, the employer-employee relationship must be that of 'master-servant' - usually independent contractors don't count. Several tests are used to determine this; method of payment (servants by wage, independent contractors by lump sum at completion of contract); supply of tools, premises etc.; taxation; pension schemes; power of 'hire and fire'; and the integration test - the extent to which everyone is acting as a unit. ...read more.

Finally, some people would say that the employee is merely an extension of the employer, given that s/he must have approved of the subordinate when s/he was first employed, so the torts are really those of the employer, committed indirectly. The bad points of this law are that there is a much greater capacity for fraud to occur, with employees intentionally harming a collaborator to get employers to compensate them, then splitting the money. This is just one way that this law could be manipulated for the benefit of either the employer or employee. If the employer wanted to sack an employee but had no good reason, then they could stage an 'accident' which pointed to the negligence of the employee, giving them an excuse to fire them and avoid an unfair dismissal action. The action would obviously be dropped once the offending employee was removed. Secondly, although the employee is supposedly an extension of the employer, can the employer really be held responsible for the actions of another person with free will? What if the employee started well in his/her duties, but quickly became lax in performing their job, and then committing a tort. Admittedly, they should really have been supervised better, but if the transformation was rapid (perhaps due to a death in the employee's family) then there really wasn't much that the employer could have done to make sure that it didn't happen. ...read more.

Written moderately well. The student should consider the problem of intentional torts committed by employees, and how this impacts on the rationale of vicarious liability, in more depth.