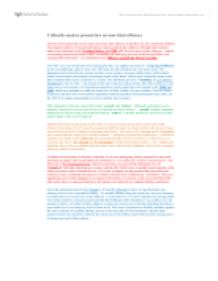 Critically analyze present law on non-fatal offences. The first observation that can be made about non-fatal offences is that they are not completely codified. The separate offences of assault and battery remain common law offences, although their separate nature was confirmed in the Criminal Justice Act 1988, s.39. But the more serious offences - assault occasioning actual bodily harm (ABH), wounding and inflicting grievous bodily harm (GBH), and causing GBH with intent - are considered in the Offences Against the Person Act 1861. The 1861 Act, even at the time of its passing into law, was rightly described as 'a rag-bag of offences' by its own draftsman, and it is now over 140 years old, the criticisms are even more acute. The language used to describe the various sections is now archaic: grievous bodily harm, which simply means serious harm; and assault occasioning actual bodily harm, which most commonly means some kind of battery that causes real harm to a victim. ...read more.

In s.47 assault occasioning ABH the statue is entirely silent on the issue of mens rea and it has been left to judges to determine what that is. The cases of R v Savage and R v Parmenter now confirm that the mens rea of assault or battery - intention or subjective recklessness - is all that is required. In s.20 the word 'malicious' has been interpreted to mean 'intention or recklessness as to causing some harm' (R v Mowatt and R v Grimshaw). In the most serious section - s.18 - judges and academic lawyers have concluded that the same word is effectively redundant, except in the secondary mens rea, intent to resist arrest. A further obvious point of criticism is that this Act is now undergoing almost perpetual revision and rewriting by judges. This could almost be referred to as 'law-making by statutory interpretation'. The 2003 case of R v Mohammed Dica, which involved the conviction of the defendant for s.20 'biological' GBH after infecting two women with the HIV/AIDS virus, is another good example of the ability of senior courts to amend the law. ...read more.

This issue of constructive liability militates against the basic principle of criminal liability, known as the principle of correspondence: that the fault element (mens rea) should be related to the actus reus of the offence and to the possible consequences of being convicted of that offence. Finally, the 'hierarchy of sentencing' can be easily criticized. Both assault and battery have the same maximum sentence of 6 months. Section 47 ABH (which need only involve 'any hurt or injury which interferes with the health or comfort of the victim') has a far greater maximum sentence of 5 years. This is exactly the same as for s.20 wounding and inflicting GBH. These maximum sentences lack even a semblance of consistency or coherence. It is now evident that there is an unarguable case for complete codification of all non-fatal offences, but even the 1994 Law Commission recommendations for reform did not include the common law offences of assault and battery. Furthermore, although these recommendations have been accepted by all subsequent governments, no action has been taken to incorporate them in any of the major Criminal Justice Act passed since then. ...read more.