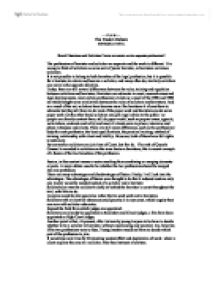 Should Barristers and Solicitors Fusion or remain as two separate professions? The professions of barrister and solicitor are separate and the work is different

. . .L a w. . . The Fusion Debate HITIKSHA PATEL Should Barristers and Solicitors Fusion or remain as two separate professions? The professions of barrister and solicitor are separate and the work is different. It is wrong to think of solicitors as some sort of junior barrister, or barristers as trainee solicitors. It is not possible to belong to both branches of the legal profession, but it is possible for a barrister to retrain and become a solicitor, and many often do; similarly solicitors can move in the opposite direction. Today, there are still several differences between the roles, training and regulation between solicitors and barristers. Barristers can advocate in court, research cases and legal developments, meet certain professional clients as a result of the 1990 and 1999 act which bought some similarities between the roles of solicitors and barristers. And as a result of the act, solicitors have become more like barristers-it allows them to advocate but they still have to do most of the paper work and barristers can do some paper work. ...read more.

Expand the field from which judges are appointed- Solicitors can already be appointed as Recorders and Circuit judges, a few have been appointed as High Court Judges. Another point is that, At present, after University young lawyers to be have to decide whether to be a solicitor or barrister, without experiencing any practical law, however, if the two professions were to fuse, Young lawyers would not have to decide which part of the profession to join. It would also save time by Eliminating wasted effort and duplication of work- where a client explains the case to a solicitor, who then instructs a barrister. A barrister in charge of the case would be able to deal with the instructions and evidence better than one who received instructions second hand- This would lead to continuity of casework. Continuity means the lawyer and client maintain, a stronger relationship and trust. There would be more continuity as the same person could deal with the case from start to finish. ...read more.

The second opinion of a barrister on a case can bring objectivity to it, and is extremely useful to solicitors confronting a client who thinks he has a good case. And finally, there would be a loss of a cab-rank rule, which is the fundamental rule that ensures client will always receive proper representation, no matter how distasteful the case or the client. An example of a country where the two professions have already fused is America-A professional attorney authorized to plead cases on behalf of and in place of their clients (a lawyer) is called an attorney-at-law, while someone authorized to act on someone else's behalf in a legal or business matter is an attorney-in-fact, who does not have to be a lawyer. According to my opinion, personally think that the two professions should not fuse. If they are just left as they are, the quality of their services and standards will be much higher than if they were to fuse. A higher work load would mean that there is too much to deal with and they could then begin to lack motivation, accuracy etc. ...read more.

A good essay, addressing the main points. A clearer structure and theme throughout, and stronger conclusion, would earn this student higher marks.