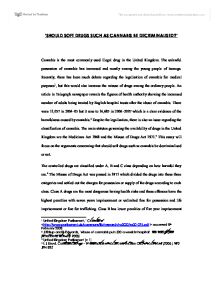 'SHOULD SOFT DRUGS SUCH AS CANNABIS BE DECRIMINALISED?' Cannabis is the most commonly used illegal drug in the United Kingdom. The unlawful possession of cannabis has increased and mostly among the young people of teenage. Recently, there has been much debate regarding the legalisation of cannabis for medical purposes1, but this would also increase the misuse of drugs among the ordinary people. An article in Telegraph newspaper reveals the figures of health authority showing the increased number of adults being treated by English hospital trusts after the abuse of cannabis. There were 11,057 in 2004-05 but it rose to 16,685 in 2006-2007 which is a clear evidence of the harmfulness caused by cannabis.2 Despite the legalisation, there is also an issue regarding the classification of cannabis. The main statutes governing the availability of drugs in the United Kingdom are the Medicines Act 1968 and the Misuse of Drugs Act 1971.3 This essay will focus on the arguments concerning that should soft drugs such as cannabis be decriminalised or not. The controlled drugs are classified under A, B and C class depending on how harmful they are.4 The Misuse of Drugs Act was passed in 1971 which divided the drugs into these three categories and settled out the charges for possession or supply of the drugs according to each class. ...read more.

The Home Secretary in March 2005 asked the Advisory Council on the Misuse of Drugs to overview the restoration of cannabis as a class B controlled drug considering the new facts regarding its harmfulness mainly that of mental illness. In January 2006, he accepted the recommendation of Advisory Council and claimed that cannabis should remain classified as a class C drug.7 According to Lacey N, Wells C and Quick O "there are three main strands to the 'drugs debate'. One is that it is morally wrong to use them; the second is that their use is harmful; and the third that there is an association between drug or alcohol abuse and criminal behaviour".8 A report by British Lung Foundation suggested that smoking cannabis can increase the risk of pulmonary infections and respiratory cancers.9 It is also considered psychologically addictive which can make a person violent if he is unable to get cannabis. The use of this cannabis can disrupt the control of blood pressure and the risk of fainting would increase. Even the occasional use by the people with heart and circulation disorder can harm and for those predisposed to schizophrenia.10 'A heavy user constantly intoxicated by cannabis may appear apathetic, lack energy and perform poorly at work or in education. ...read more.

pain, asthma, and it can also be useful for the patients suffering from aids by slowing down the loss of appetite.16 In addition, some people think that most of the crimes are committed by the people who use drugs, but it is believed that alcohol is rather than illegal drugs which tend a person to be in relation with criminal activities and violent behaviour.17 Nevertheless, alcohol and tobacco which are also dangerous or harmful for health are legalised and cannabis is not. In conclusion, considering the needs and use of cannabis, provisions should be made by which patients regarding health reasons could obtain it with a prescription. As in California, the owner of the Herbal Nutrition Centre said that patients will soon after showing their prescription and be fingerprinted and photographed will be allowed use of facilities to obtain cannabis from public vending machines. It would decrease the drug abuse and can help the patients who want to use cannabis for health reasons. The International Journal of Clinical Practice published a survey of United Kingdom in which 70% of the people said that cannabis significantly comforted their symptoms and 45% among them stated cannabis as better than the prescribed drugs. ...read more.