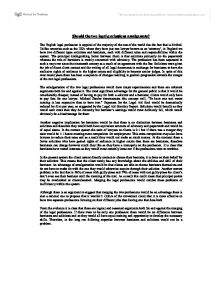 Should the two legal professions amalgamate?

Should the two legal professions amalgamate? The English legal profession is atypical of the majority of the rest of the world due the fact that is divided. Unlike countries such as the USA where they have just one lawyer known as an 'attorney�, in England we have two different types solicitors and barristers, each with different roles and responsibilities within the system. The principal distinguishing factor between them is that solicitors primarily do the paperwork whereas the role of barristers is mainly concerned with advocacy. The profession has been separated in such a way ever since the nineteenth century as a result of an agreement with the Bar. Solicitors were given the job of direct client contact and the writing of all legal documents in exchange for barristers to have the exclusive rights of audience in the higher courts and eligibility to become senior judges. ...read more.

Solicitors would benefit as they would earn more then they do currently but barrister's earnings would most definitely fall, which would obviously be a disadvantage for them. Another negative implication for barristers would be that there is no distinction between barristers and solicitors and therefore they would both have equivalent amounts of advocacy and paperwork and would be of equal status. In the current system the ratio of lawyers to clients is 2:1 but if there was a merger they ratio would be 1:1 hence creating more competition for employment. This extra competition may also force lawyers to reduce their rates and as a result they would not make as much money. At the moment there a fewer solicitors who have gained rights of audience in higher courts than there are barristers, therefore barristers can charge however much they like as they have a monopoly on the profession. ...read more.

As a result this could mean that principal points may be overlooked or misunderstood. Merging the legal professions would combat these problems of inefficiency within the system. Although there is an argument to suggest that merging the two professions would be an advantage there is also a rational one to propose that it wouldn't. Critics of the movement claim that it is more effective to have two separate professions focusing on their different jobs than having one that does both From the evidence it is clear that there are logical and reasoned arguments both for and against the merging of the legal professions. If there were to be only one profession there would be no difference between barristers and solicitors and so they would all have equal training and opportunity to develop the necessary skills. Therefore, in the long run differing expertise between barristers and solicitors would not be a problem. ...read more.