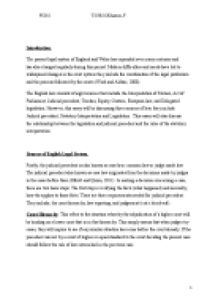 Sources of the English Legal System and the Relationship between Legislation and Judicial precedent.

﻿FC012 T2258212Khanum, F. Introduction. The present legal system of England and Wales has expanded over many centuries and has also changed regularly during this period. Modern difficulties and needs have led to widespread changes in the court system they include the coordination of the legal profession and the process followed by the courts (Ward and Akhtar, 2008). The English law consists of eight sources that include the Interpretation of Statues, Act of Parliament, Judicial precedent, Treaties, Equity, Custom, European law, and Delegated legislation. However, this essay will be discussing three sources of law, they include: Judicial precedent, Statutory Interpretation and Legislation . This essay will also discuss the relationship between the legislation and judicial precedent and the rules of the statutory interpretation. Sources of English Legal System. Firstly, the judicial precedent is also known as case law, common law or judge-made law. The judicial precedent also known as case law originates from the decisions made by judges in the cases before them (Elliott and Quinn, 2011). In making a decision concerning a case, there are two basic steps. The first step is verifying the facts (what happened) and secondly, how the applies to those facts. There are three requirements needed for judicial precedent. ...read more.

There are two contrary views with the way judges determine the meaning of a statute. They include; Literal and Purposive approach (Slapper & Kelly, 2010). The literal approach is dominant in the English legal system. This view of judicial interpretation is concerned about judges looking primarily to the words of the legislation so as to find out its meaning. They are not allowed to look beyond or behind the legislation in search of the meaning of the statute. On the other hand, the purposive approach tends to avoid restrictions of the judges? search for the meaning to a literal arrangement of words of the legislation itself. It suggests judges should be able to look outside the words of the statutes in search of the reason for its enactment and that meaning should be interpreted for the purpose so it can be effective (Slapper& Kelly, 2010). The three rules of interpretation are; Literal, Golden and Mischief rule. Firstly, the literal rule simply means courts giving their apparent, clear and ordinary meaning even if the significance is not meaningful (Huxley-Binns and Martin, 2008). This idea was expressed by Lord Esther in R v Judge of the city of London Court (1892) 1 QB 273.[2] An example of a case that made use of the literal rule is Whiteley v Chappell (1868) ...read more.

The principle of Hansard when interpreting a statute is what a minister has said about a piece of legislation so as to decide what the parliament has planned ( Elliott & Quinn 2011). Conclusion. This report has thoroughly discussed the relationship between the legislation and judicial precedent. It discussed parliamentary supremacy, separation of powers, rules of statutory interpretation and ambiguity of the language. It further discussed the rules of statutory interpretation and the two views which are literal and purposive approach. The rules are literal, golden and mischief rule. Finally, it discussed the aids of interpretation which includes Hansard (document of parliamentary debates). ________________ [1] It was held in the House of Lords. [2] If the words of an act are clear then you must abide by them even though they lead to a manifest absurdity. The court has nothing to do with the question whether the legislature has committed an absurdity. [3] Jervis said ?We must therefore, in this case have recourse to what is called the golden rule of construction, as applied to Acts of Parliament, viz, to give words used by the legislature their plan meaning useless it is seen from the common perspective and the purpose of the statute, injustice, and the result of absurdity.? [4] It was used in the case David v Johnson (1979). [5] It was settled in the House of Lords. [6] Benefit gotten from a job. ...read more.