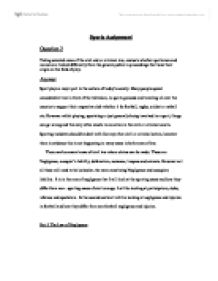 Taking selected areas of the civil and or criminal law, evaluate whether sportsmen and women are treated differently from the general public in proceedings that have their origin on the field of play.

Sports Assignment Question 2 Taking selected areas of the civil and or criminal law, evaluate whether sportsmen and women are treated differently from the general public in proceedings that have their origin on the field of play. Answer Sport plays a major part in the culture of today's society. Many people spend considerable time in front of the television, in sports grounds and traveling all over the country to support their respective club whether it be football, rugby, cricket or netball etc. However whilst playing, spectating or just generally being involved in a sport, things can go wrong and this very often results in an action in the civil or criminal courts. Sporting incidents should be dealt with like any other civil or criminal action, however there is evidence this is not happening in many cases in both areas of law. There can be several areas of civil law where claims can be made. These are Negligence, occupier's liability, defamation, nuisance, trespass and animals. However not all these will need to be looked at, the main ones being Negligence and occupiers liability. It is in the area of negligence that I will look at the sporting cases and how they differ from non - sporting cases of civil wrongs. I will be looking at participators, clubs, referees and spectators. In the second section I will be looking at negligence and injuries in football and how they differ from non football negligence and injuries. Part 1 The Law of Negligence Negligence occurs in many areas of civil Law. Negligence consists of three elements, namely a legal duty to take care, breach of that duty and damage suffered as a consequence of that breach. The test for establishing whether a duty of care is owed is based on the famous case of Donaghue v Stevenson 1932 AC 562 and the neighbour principle set out by Lord Atkin. ...read more.

This is shown in the case of Bolton v Stone [1951] All ER 1078 where it was held that the incident must be reasonably foreseeable and the result is what a reasonable man would contemplate. There must be sufficient probability to lead a reasonable man to anticipate it. In this case during a cricket match a ball was struck outside the ground and injured a man standing on the adjacent highway. It was held that it was not reasonable foreseeable that such an injury may occur. In Miller v Jackson [1977] 3 All ER 388 CA a house was built next door to a cricket ground and although a 15foot fence was put up by the cricket club the family found it impossible to use their garden during a cricket match as on many occasions a cricket ball landed in the garden. The family was awarded damages, so here the general public's protection was upheld. However there was a greater public interest to keep the cricket ground open so therefore the injunction granted earlier would be discharged. The participator in the sport may also be negligent in the course of the game they are playing. They are generally said to consent to actions that occur in the game but sometimes the negligent act may go beyond what it is possible to consent to. The ordinary rules of negligence do apply to sports participants and the participator must take reasonable care and avoid foreseeable harm to those who may be injured by his acts. All participants agree to the same standards of care. Players who act outside the rules will be liable. The standard for participants is shown in the case of Condon v Basi, where it states that a football player should be measured by a variable standard of care. However it was later decided that all players should be judged by the same standard of care and this was reinforced in the case of Elliot v Saunders and Liverpool Football Club (unreported). ...read more.

This was the situation with the incident at Bristol City at the start of this year, and although the assault was beyond what could be consented to, the injured player probably did not want to pursue the matter as he felt he was equally involved; because of provocation or at the request of the clubs to prevent adverse publicity. This could be compared to say an assault in the street outside a night club when there is every possibility the aggrieved and injured party would press charges and seek a Compensation Order in the magistrates' court or even commence civil proceedings for the injuries received. This may also result in a claim to the Criminal Injuries Compensation Board. The court may not entertain a claim in this scenario if there was any sort of contributory negligence or the aggrieved party had been drinking or taking drugs. However an attack of such a nature as at Bristol City is likely to end up in a civil or criminal court if a member of public was involved. In the civil court I would argue that there is no legal difference between claims from the general public or sporting incidents. If a duty of care is found, and that there has been a breach of that duty, then any claim is possible. The only difference I would say however is that a sports player or club may be more reluctant to claim and if a claim was pursued would prefer to settle out of court to prevent bad publicity for themselves or the club. Pro-rata there are probably fewer "sporting claims" than general public civil claims but the burden and standard of proof are the same in all cases. In the public domain the high amount of claims is not helped by the "claims culture" and specialist claims companies that have developed today. The only non-legal means of securing compensation for sports injuries currently widely available is insurance. However few players outside the top flight are insured. ...read more.

Fair conclusion. But no discussion of women, specifically (as requested by the essay).

4 Stars (for sports aspect). Overall maximum 2 Stars because women are not discussed.