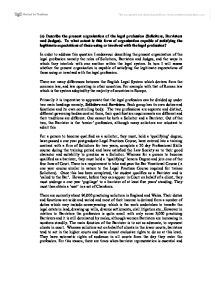 (a) Describe the present organisation of the legal profession (Solicitors, Barristers and Judges). To what extent is this form of organisation capable of satisfying the legitimate expectations of those using or involved with the legal profession? In order to address this question I endeavour describing the present organization of the legal profession namely the roles of Solicitors, Barristers and Judges, and the ways in which they interlink with one another within the legal system. In turn I will assess whether the present organisation is capable of satisfying the legitimate expectations of those using or involved with the legal profession. There are many differences between the English Legal System which derives from the common law, and law operating in other countries. For example with that of Roman law which is the system adopted by the majority of countries in Europe. Primarily it is imperative to appreciate that the legal profession can be divided up under two main headings namely, Solicitors and Barristers. Each group has its own duties and functions and its own controlling body. The two professions are separate and distinct, different governing bodies control them, their qualification requirements are different and their traditions are different. One cannot be both a Solicitor and a Barrister. Out of the two, the Barrister is the 'senior' profession, although many solicitors are reluctant to admit this For a person to become qualified as a solicitor, they must, hold a 'qualifying' degree, have passed a one year postgraduate Legal Practices Course, have entered into a training contract with a firm of ...read more.

The reasons given were that if a Barrister could be sued for negligence, it would mean a retrial of the original case. This would open the door to every dissatisfied litigant and lead to a multitude of pointless actions. However, this has changed due to the landmark House of Lords decision in Arthur J.S. Hall & Co. -v- Simons (2000) where it was held that a barrister can now be sued for negligent conduct of a case in court and for negligent preparation at the pre-trial stage The ways in which the two roles of Solicitor and Barrister interlink with one another can be shown since it is not permissible for a private individual to approach a barrister directly. What must happen is that a solicitor must introduce the client to the barrister. In a way, this works to the client's advantage, for he does not have to search around for a barrister who specialises in the particular area upon which he needs advice. However the the position has changed slightly under the provisions of The Courts and Legal Services Act 1990 in that some professionals do have the right to approach a Barrister direct (i.e. accountants and other specialists) and under s. 61 this right is extended to provide for Barristers to enter into a contract with clients direct for the provision of services. However this has caused wide spread debate In relation to the role of judges within the legal system, up until recently barristers dominated judicial appointments above circuit judgeships. ...read more.

The rule of law guarantees their impartiality. However the constitutional disputes that began before the MoJ even opened its doors continues. Just after the government announced that the MoJ was to be established, the Lord Chancellor claimed that the MoJ would "strengthen further the already strong judicial-executive relationship set out in the concordat..., which sets out the roles and responsibilities of the Lord Chancellor and the judiciary". However, this seems to be at odds with the Lord Chief Justice's opinion on the subject. He responded to the announcement with a statement detailing the important issues of principle that the creation of the MoJ raised: "structures are required which will prevent the additional responsibilities of the new ministry interfering with or damaging the independent administration and proper funding of the court service and the continuing problems of prison overcrowding and the availability of resources to provide the sentences imposed by the courts necessitate public debate". In conclusion despite the arguments for and against the creation of the MoJ in May 2007 the plans went ahead. However, many important issues of principle between the executive and the judiciary have not been resolved. Judges are concerned that they will come under pressure to adjust their sentencing practice to accommodate the prison-overcrowding crisis. Magistrates have also backed the judges' calls for constitutional safeguards to protect their independence. With no new money being made available to the new MoJ, despite its expanded remit, there is a further fear that the Court Service's and the legal aid budgets will be squeezed to deal with the ever-growing prison population. ...read more.

Summary
Two contrasting pieces here: the first about the legal professions is perhaps a little outdated as the solicitors' and barristers' professions have found there is room to practise alongside each other. The second piece is very contemporary, considering issues about the control of the legal system that remain unresolved.
Rating: ****