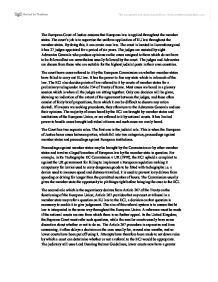 The European Court of Justice ensures that European law is applied throughout the member states. The court's job is to supervise the uniform application of EU law throughout the member states. By doing this, it can create case law. The court is located in Luxembourg and it has 27 judges appointed for a period of six years. The judges are assisted by eight Advocates Generals who produce opinions on the cases assigned to them which do not have to be followed but are nevertheless usually followed by the court. The judges and Advocates are chosen from those who are suitable for the highest judicial posts in their own countries. The court hears cases referred to it by the European Commission on whether member states have failed to carry out EU law. It has the power to fine any state which is in breach of the law. The ECJ also decides points of law referred to it by courts of member states for a preliminary ruling under Article 234 of Treaty of Rome. Most cases are heard in a plenary session which is when all the judges are sitting together. Only one decision will be given, showing no indication of the extent of the agreement between the judges, and these often consist of fairly brief propositions, from which it can be difficult to discern any ration decindi. ...read more.

There are three main types of EU law, and these are regulations, treaties and directives. Regulations are made by the EU. They are applicable throughout the EU, usually to people in general and they become part of the law of each member nation as soon as they come into force without the need for each country to make its own legislation. A case to illustrate this is, Leonesio v Italian Ministry for Agriculture and Forestry (1973). In this case, regulation to encourage reduced dairy production stated that a cash premium should be paid to farmers who slaughtered cows and agreed not to produce milk for nine years. Leonesio had fulfilled this requirement, but was refused payment because the Italian constitution required legislation to authorise government expenditure. The ECJ said that once Leonesio had satisfied the conditions stated in the EU regulations, he was entitled to the payment; the Italian Government could not use its own laws to block that right. The second are international agreements that are related to as treaties. By entering into a treaty, the government of the United Kingdom is undertaking to implement the laws which are the subject matter of the treaty. The founding treaties are the Treaty of European Union and the Treaty of the Functioning of the European Union. These treaties have been amended over the years and their article numbers changed as the EU expanded. ...read more.

The fishing policy decided by member states in 1983 allowed member states to limit fishing within 12 miles of their own shores to boats from their own country, and left the remainder of the seas around the European Community open to fishing boats from any member state. To preserve stocks of fish, each state was given a quota of fish, and required not to exceed it. Shortly after the new rules were in place, the UK Government became concerned that Spanish fishing boats were registering as British vessels, so that their catches counted against British quota rather than Spanish. The UK Government therefore passed the Merchant Shipping Act 1988, which contained provisions to prevent the Spanish trawlers taking advantage of the British quota. Spanish boat owners challenged the Act, claiming it was in conflict with EU law on the freedom to set up business anywhere in Europe, and the House of Lords agreed. They said S.2(4) of the European Communities Act has precisely the same effect as if a section was included in the 1988 Act saying, that the provisions with respect to registration of British fishing vessels were to be without prejudice to the directly enforceable community rights of nations of any member state. The decision was criticised as comprising the rights of the UK Parliament to make law for the UK. It was pointed out by the House of Lords that joining the European Union meant the UK had to give up some degree of sovereignty. ...read more.