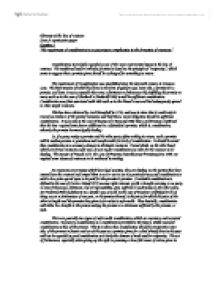 &quot;The requirement of consideration is an unnecessary complication in the formation of contracts.&quot;

Elements of the law of contract Zone A examination paper Question 1 "The requirement of consideration is an unnecessary complication in the formation of contracts." Consideration is probably regarded as one of the most controversial issues in the law of contract. The traditional and/or orthodox doctrine is based on the principle of "reciprocity", which seems to suggest that a promise given should be exchanged for something in return. The requirement of Consideration was established since the sixteenth century in Common Law. The first mention of which had been in the form of quid pro quo, inter alia, a promise for a promise, and later, it was acceptable that even a detriment or forbearance like fulfilling the promise to marry such as in the case of Shadwell v Shadwell[1860] would be sufficient consideration. Consideration was first associated with debt such as in the Pinnel's case and had subsequently spread to other simple contracts. This has been criticized by Lord Mansfield in 1756, and was in view that it could only be treated as evidence of the parties' intention and held that a moral obligation should be sufficient consideration. It was only in the case of Eastwood v Kenyon[1840] that Lord Denman confirmed that the law required some factor additional to a defendant's promise, which is, consideration, whereby the promise becomes legally binding. So, if a party makes a promise and the other party offers nothing in return, such a promise will be nudum pactum or gratuitous and unenforceable for lack of consideration. It should be noted that consideration is a necessary element in all simple contracts. Formal deeds, on the other hand, which are formal contracts under seal, do not require consideration in order for the contract to be binding. The statute of Frauds 1677, the Law of Property (miscellaneous Provisions) Act 1989, etc required some classes of contracts to be evidenced in writing. ...read more.

At this point, the requirement of consideration becomes vague. Clearly, doing what one is already obliged to do does not constitute good consideration. Despite this, Lord Denning and the majority of the Court of Appeal claimed that she did provide good consideration in the sense that she done more than she was obliged to do by keeping her child happy. It could further mean that consideration no longer requires being of some economic value and this point is further supported by the more recent case of Edmonds v Lawson [2000]. Strictly speaking, this area in regards to whether there is a valid consideration and the distinction between an acceptable and unacceptable consideration is becoming more and more vague and may well seemed to be ultimately dependent upon the discretion of the judges. It is a general rule that performing an act which one is already legally obliged to do is not good consideration as in the cases of Collins v Godefroy [1831] and Wade v Simeon [1846] where it was held that such consideration is not good consideration. And yet in the case of Cook v Wright [1861] the court held that there was consideration and it was even argued that the claimant had provided consideration by honestly believing that they were entitled to their claim, regardless of the fact that generally consideration has to consist of at least a little economic value. Thus, this shows, at times, it is very difficult to understand how the requirement of consideration is provided. Another case to illustrate this point would be Williams v Roffrey Bros [1991], where the defendants promised a bonus to the claimants for doing what they were already under a contractual duty to do. There was no fresh consideration to support the additional promise and according to the general rule, as established in the case of Stilk v Myrick [1809], the promisor would not be under a legal duty to enforce his promise. ...read more.

the performance of the contract, then there was no duress, extortion or improper pressure, the court would be willing to enforce such a promise even if it means that the courts must invent consideration. Clearly this shows that ultimately, it is at the discretion of the judges to whether how any case is decided. Thus it is debatable whether there is truly a need for simple contracts to require consideration. It would seem that the difference in decisions of the current and past cases shows that the law on consideration had gradually developed over time and no longer remains quite as rigid as it originally was in the past. This could be because, when society gradually advances, ideas and principles change from time to time and the law, being flux, adapts accordingly. So, while in the past, the want of consideration could be vital as it provides evidence and defeats fraudulent claims. However, such a role, in the light of today, is of a less importance. Though, by the end of the day, the truth remains that regardless of whether what one might think regarding if the doctrine of Consideration serves any useful purpose, as it does not generally seem to give rise to problems. If the English Courts wishes to enforce a contract, they will be creative enough to find consideration. Such as in the case of Bowerman v ABTA [1996], where the parties who read ABTA's poster before contracting with travel agents were held to have given consideration for a contract with ABTA by choosing to deal with their members. Thus, English courts are peculiar in the sense that, for them, there is always consideration if one is to look hard enough. Therefore, it could be submitted that the trend of more recent developments in regards to the requirement of consideration seems to suggest that it will only be a matter of time before the doctrine of consideration is further eroded or abandoned altogether. By: Sylvia Ching-Ye Kong Date: 8 August 2004 ...read more.

An overly long and at times unfocused essay. However, the detail is largely accurate and shows a depth of understanding of consideration and associated problems.

A better approach would be to consider this issue in the context of the benefit/detriment analysis and how this does not fit in with the idea of "invented consideration".

The student may also raise: the fact that an exchange of promises may constitute consideration, the range of exceptions to basic principles (eg. the fact that consideration need not be adequate but must be more than "illusionary" / does not apply to gifts of onerous property) and the complexity of Collier v Wright "decreasing" pact and estoppel rules.