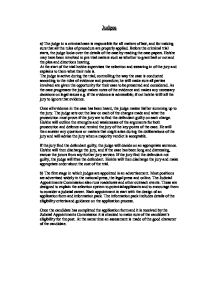 The role and appointment of judges.

Judges a) The judge in a criminal case is responsible for all matters of law, and for making sure that all the rules of procedure are properly applied. Before the criminal trial starts, the judge looks over the details of the case by reading the case papers. He/she may have been involved in pre trial matters such as whether to grant bail or not and the plea and directions hearing. At the start of the trial he/she supervises the selection and swearing in of the jury and explains to them what their role is. The judge is active during the trial, controlling the way the case is conducted according to the rules of evidence and procedure; he will make sure all parties involved are given the opportunity for their case to be presented and considered. As the case progresses the judge makes notes of the evidence and makes any necessary decisions on legal issues e.g. ...read more.

The information pack includes details of the eligibility criteria and guidance on the application process. Once the candidate has completed the application form and it is received by the Judicial Appointments Commission it is checked to make sure of the candidate's eligibility for the post. At the same time an assessment is made of the good character of the candidate. Candidates are asked on their application form to nominate up to three referees. The Judicial Appointments Commission may also seek references from a list of Commission nominated referees, which is published for each selection exercise. In all cases, references will form part of the information that the Judicial Appointments Commission will use to make final selection recommendations. Shortlisting is then done. The next stage of the assessment will vary depending on the nature of the post to be filled. Candidates might be asked to attend a selection day, which might consist of a combination of role-plays and an interview. ...read more.

The objective is that all judicial disciplinary issues be dealt with consistently, fairly and efficiently. The complaints must be about the personal conduct of the judge and no the actual decision made by him/her. The OJC may dismiss a complaint, or part of a complaint, if it fails to meet the criteria set out in the judicial discipline regulations. If the case is not dismissed by the OJC, the Lord Chancellor and the Lord Chief Justice will consider the evidence and decide what action, if any, is appropriate. In certain complex cases the matter may be referred to a senior Judge for a judicial investigation If a complaint is upheld the Lord Chief Justice and the Lord Chancellor may decide to take disciplinary action against the Judge. However any such disciplinary action is a separate matter from the court case so it will not alter the outcome of the case. It is however, hard to dismiss a judge; any judge at High Court level and above cannot be dismissed without a vote of both houses of parliament and none has been sacked within living memory. ...read more.