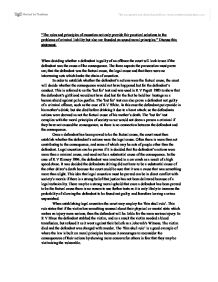 The rules and principles of causation not only provide fair practical solutions to the problems of criminal liability but also are founded on sound moral principles. Discuss this statement.

"The rules and principles of causation not only provide fair practical solutions to the problems of criminal liability but also are founded on sound moral principles." Discuss this statement. When deciding whether a defendant is guilty of an offence the court will look to see if the defendant was the cause of the consequence. The three aspects the prosecution must prove are; that the defendant was the factual cause, the legal cause and that there were no intervening acts which broke the chain of causation. In order to establish whether the defendant's actions were the factual cause, the court will decide whether the consequence would not have happened but for the defendant's conduct. This is referred to as the 'but for' test and was used in R V Pagett 1983 to show that the defendant's girlfriend would not have died but for the fact he held her hostage as a human shield against police gunfire. The 'but for' test can also prove a defendant not guilty of a criminal offence, such as the case of R V White. ...read more.

When establishing legal causation the court may employ the 'thin skull rule'. This rule states that if the victim has something unusual about their physical or mental state which makes an injury more serious, then the defendant will be liable for the more serious injury. In R V Blaue the defendant stabbed the victim, and as a result the victim needed a blood transfusion, but refused it as it went against their beliefs as a Jehovah's Witness. The victim died and the defendant was charged with murder. The 'thin skull rule' is a good example of where the law is built on moral principles because it encourages to reconsider the consequences of their actions by showing more concern for others in fear that they may be victimising the vulnerable. If factual and legal causation is proven a chain of causation is created in order to establish whether something else happened after the defendant's actions which may have contributed to the consequence. This is referred to as an intervening act and can either be an act of a third party, the victim's own acts, or a natural but unpredictable event. ...read more.

As this was a foreseeable action of the victim, the defendant would be the causation of the victim's injuries. However, in R V Williams the victim jumped from the defendant's car to prevent his wallet from being stolen and died as a result. This was deemed to be an unforeseeable act of the victim in which cannot be blamed on the defendant. This distinction in the law poses a great deal of controversy in society's morals as a defendant could claim there were 'unforeseeable consequences' for any offence in order to gain a not guilty verdict. This raises the question of where does society 'draw the line' to keep the law fair and precedential, and how will justice be delivered for the victims who have died or sustained serious injuries because of the defendants conduct. In order for moral principles to be upheld in these cases, a jury would need to decide whether the victim's actions were foreseeable based on the case's own merits alone which goes against the doctrine of precedent of which our legal system is built upon. ...read more.