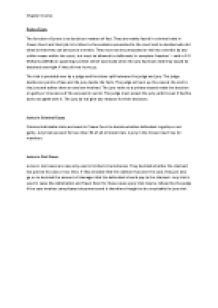 The Selection and Role of Juries

﻿Chapter 6 Juries Role of Jury The function of jurors is to decide on matters of fact. They are mainly found in criminal trials in Crown Court and their job Is to listen to the evidence presented to the court and to decided who did what so that they can announce a verdict. They must not be persuaded or led into a verdict by any unfair means within the court, but must be allowed to deliberate ?in complete freedom? ? said in R V McKenna (1960) en quashing a verdict which was made when the jury had been told they would be detained overnight if they did not hurry up. The trial is presided over by a judge and functions split between the judge and jury. The judge decides on points of law and the jury decide the facts. The judge will sum up the case at the end to the jury and advise them on any law involved. The jury retire to a private rooand make the decision on guilty or innocence of the accused in secret. The judge must accept the jury verdict even if he/she does not agree with it. ...read more.

The limits on vetting for previous conviction were stressed again in R v Obellim and Others (1996). The case concerned a criminal trial in which the judge had received a written question from the jury which displayed a lot of knowledge about police powers and led him to suspect that one of the jurors might ordered a security check on the jury without telling the defence counsel who discovered the check had taken place when the jury complained about it after delivering its verdict. The defendant was convicted and appeal on the ground that the check on jury members might have prejudiced them. The Court of Appeal agreed and quashed the conviction stating that it was questionable whether the check should have been ordered at all on such a ground and it certainly should not have been carried out without informing defence counsel. Selection at court Jurors are usually divided into groups of 15 and allocated to court. At the strat of trial, the court clerk will select 12 out of these 15 at random. The selected jurors are most commonly divided into groups of 15 and then assigned to a court case. ...read more.

The prosecution does not have to give a reason for standing by the Attorney-General?s guidelines make it clear that this power should be used sparingly. Majority Verdicts If after at least 2 hours (longer where there are several defendants), the jury have not reached a verdict, the judge can call them back into the courtroom and direct them that he can now accept a majority verdict. Where there is a full jury of 12, the verdict can be 10:2 or 11:1 either for guilty or for not guilty. If the jury has fallen below 12 for any reason such as death or illness of a juror during trial then only one can disagree with the verdict. They accept a majority of 10:1 or 9:1. If there are only 9 jurors, the verdict must be unanimous. A jury cannot go below nine. Majority verdicts were introduced because of the fear of jury ?nobbling? that is jurors being bribed or intimidated by associates of the defendant into voting for a not guilty verdict. When a jury has to be unanimous, only one member needs to be bribed to cause a ?stalemate? in which the jury were unable to reach a decision. ...read more.