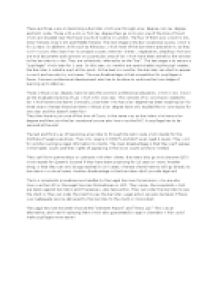 There are three ways on becoming a Barrister which are; through a law degree, non law degree and ILEX route.

﻿There are three ways on becoming a Barrister which are; through a law degree, non law degree and ILEX route. Those with a 2:1 or first law degree then go on to join one of the Inns of Court which are situated near the Royal Courts of Justice in London. The four of them are; Lincoln?s Inn, Inner Temple, Gray?s Inn and Middle Temple. The next stage is the Bar vocational course, which is for 2 years. In addition, skills such as Advocacy, which most of the barristers specialise in, as they work in court, they learn how to prepare a case, interview clients , negotiation, pleading which are pre trial documents and opinions on a particular area of law which have been asked by the solicitor to the barrister to write. ...read more.

Those without a law degree, have to take the common professional education, which is now known as the Graduate Diploma of Law which is for one year. This consists of six core topics related to law which have to be learnt. Ironically, a barrister who has a law degree has been studying law for three years whereas those barristers without a law degree have only studied the six core topics for one year and this doesn?t seem fair! They then have to join one of the Inns of Court, in the same way as barristers who have a law degree and then join the Bar vocational course also known as the BVC. A pupillage has to be secured at the end. ...read more.

Another thing, is that they can only be approached in civil cases, whereas clients have to still go directly to barristers in criminal cases. Another disadvantage is that barristers don?t provide legal aid. The two complaints procedures are handles by the Legal Services Commission, who are also known as the LSC or the Legal Services Ombudsmen or LSO. They review the complaints which are taken against barristers and if necessary, also take action. They can order the barrister to pay the client or they can order the client to pay the barrister. Legal action can also be taken if there was inadequate service delivered by the barrister to the client or misconduct. The Legal Services Act 2007 showed the ?Clementi Report? and ?Tesco Law? This was an alternative, and wasn?t replacing them which also guaranteed a wage in chambers which could make pupillages more easier! ...read more.