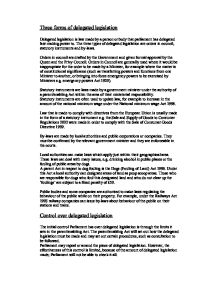 Three forms of Delegated Legislation and Control over it.

Three forms of delegated legislation Delegated legislation is law made by a person or body that parliament has delegated law-making power to. The three types of delegated legislation are orders in council, statutory instruments and by-laws. Orders in council are drafted by the Government and given formal approval by the Queen and the Privy Council. Orders in Council are generally used where it would be inappropriate for the order to be made by a Minister, for example where the matter is of constitutional significance (such as transferring powers and functions from one Minister to another, or bringing into force emergency powers to be exercised by Ministers e.g. emergency powers Act 1920). Statutory instruments are laws made by a government minister under the authority of a parent/enabling Act within the area of their ministerial responsibility. Statutory instruments are often used to update law, for example to increase in the amount of the national minimum wage under the National minimum wage Act 1998. Law that is made to comply with directives from the European Union is usually made in the form of a statutory instrument e.g. ...read more.

Control over delegated legislation The initial control Parliament has over delegated legislation is through the limits it sets in the parent/enabling Act. The parent/enabling Act will set out how the delegated legislation must be made and may set out certain procedures, such as consultation to be followed. Parliament may repeal or amend the piece of delegated legislation. However, the effectiveness of this control is limited, because of the amount of delegated legislation made; Parliament will not be able to check it all. All by-laws are confirmed or approved by the relevant government minister. This should ensure that all locally made law is overseen by those with the expertise of the technical issues involved. The Joint Select Committee on Statutory Instruments reviews statutory instruments and refers provisions requiring further consideration to both Houses of Parliament. This is arguably one of the more effective controls, as many statutory instruments are subject to some scrutiny. The House of Lords Delegated Powers Scrutiny Committee checks all Bills for any inappropriate enabling provisions. ...read more.

Summary: Neither piece sets out a specific question. However both parts accurately described delegated legislation and controls over it. Both parts could be improved by use of examples and/or case examples.
Rating: ****