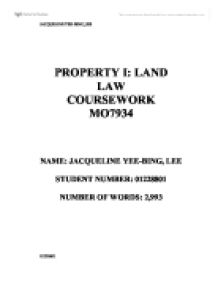 PROPERTY I: LAND LAW COURSEWORK MO7934 NAME: JACQUELINE YEE-BING, LEE STUDENT NUMBER: 01228801 NUMBER OF WORDS: 2,993 Q.1 To advise Reggie, it is necessary to look at the law of adverse possession. Adverse possession is actual possession in the absence of possession by the rightful owner, and without lawful title. In adverse possession, no action can be brought by a person to recover land more than twelve years from the date on which the right accrued.1 Once twelve years past, the owner will lose both right to sue and his title to the property,2 as time will start to run against the prior owner only once he had been disposed or has discontinued possession3 and when adverse possession has been taken by another person.4 However, the law will be changed after the Land Registration Act 2002 (not yet in force) where section 96 of Land Registration Act 2002 which suspend the operation of section 15 and section 17 of the Limitation Act 1980. In this case, the island and the land on the shore will be treated as registered land. When Phil sold the land on the shore to his neighbour, Amanda, in 1970, the time starts then and Amanda have the right and interest to the land. However, the island would remain in Phil's possession as of 1965. In 1975, the time of adverse possession would start to run, when Reggie, without Amanda's agreement or consent, decided to move in and use the land for himself.5 Reggie's act where he began charging tourist for day fishing permits from the shore of the island is 'inconsistent' to Phil's initial act,6 as well as when Reggie parked his caravan on Amanda's land and started living there, these are clear signs of his intention to possess the land.7 Furthermore, when Reggie began keeping horses to hire out to the tourists; he is again, acting inconsistent to Amanda's original act.8 In 1977, Reggie built a fence to keep the horses from straying, 'fencing' the land is ...read more.

So, assuming that there was a course of dealing between them, this would then constitute to '..a course of dealing sufficient to intimate that the interests of all were mutually treated as constituting a tenancy in common"32 between Carmen and Dominique which in result amounted to severance. This would then make Dominique himself having three fourth of the share altogether while Bruiser having one fourth of the share as tenancy in common. However, on the other hand, if there was no severance, in regards to Carmen's share, of which she is still a joint tenant, her interest would disappear and go by right of survivorship upon her death and Dominique alone is the only survivor left. Unlike tenancy in common, in joint tenancy, the joint tenant cannot leave his or her share by will or allow it to pass on intestacy. Thus, Manuela will not be able to get Carmen's share in the legal estate. Lastly, the bankruptcy of a joint tenant will sever the equitable joint tenancy. Thus, when Dominique is declared bankrupt and her trustee in bankruptcy becomes entitled to all her property, which simply means that whilst Dominique has got three fourth of the share in the house, his equitable interest are vested upon his trustee who have "all the powers of an absolute owner" but only "for the purpose of exercising their power of trustees".33 This is because bankruptcy vest Dominique's property in the trustee in bankruptcy and this clearly affects a severance.34 To sum up, Dominique will wholly own the legal estate while his equitable interests in the legal estate will be vested upon his trustee in bankruptcy and Bruiser has one fourth of the share as tenancy in common. Both Manuela and Arnie will own nothing. Q. 3 To answer this question, it is important to distinguish between a lease and a licence. A lease is an interest in land and a licence is merely a personal permission to do something that would otherwise be a trespass. ...read more.

This power is not to be implemented until the power of sale has become exercisable.57 A receiver is considered to be the agent of the mortgagor, thus, is solely responsible for the receiver's act or defaults, unless the mortgage otherwise provides. Therefore, a mortgagee, who wishes to gain profit from land, will generally appoint a receiver rather than take possession of the land himself because if he allocates a receiver, he avoids liability on the basis of wilful default.58 After paying various expenditures and his own commission, the receiver must apply any money received by him in payment of the interest due under the mortgage, in writing, if directed by the mortgagee, towards the discharge of the principal money.59 A mortgagee whose mortgage is not by deed may apply to the court for the appointment of a receiver.60 Foreclosure is a court procedure whereby the mortgagor's estate is vested in the mortgagee as soon as the contractual date for redemption has passed.61 It involves the foreclosure nisi and the foreclosure absolute. The former requires the mortgagor to repay the money borrowed, and so transfer the mortgage, within a set period,(normally six months). Failure to do so will lead to the foreclosure being made absolute. The court has power to order sale instead of foreclosure62 and will generally do so unless it appears that the value of the property is equal to the mortgage debt. By the equitable remedy of foreclosure equity takes away from the mortgagor the very interest which it has created, the equity of redemption. Therefore, foreclosure is the mortgagee's counterblast to the mortgagor's equity of redemption. This remedy is available only on application to the court.63 This is a harsh remedy and is rarely used nowadays.64 In conclusion, a mortgagee's interest can be protected through enforcing their right to sue the mortgagor's covenant to repay, right to possession, right to sale as well as appoint a receiver and foreclosure. ...read more.