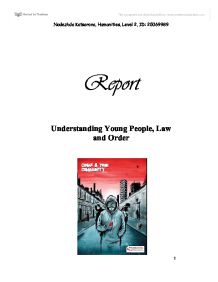 Report Understanding Young People, Law and Order Contents 1.1 Describe three factors that may contribute to the reasons why young people become involved in crime 2.1 Describe the consequences of two given crimes for: a) the victim b) the offender 3.1 Describe each stage of the Criminal/Youth Justice System from reporting through to sentencing. 3.2 Describe the role of people involved at each stage. 4.1 Describe two arguments for and two arguments against custodial sentences. 4.2 Explain the disadvantages and disadvantages of two alterative forms of sentence. 5.1 Describe how local agencies, for example, Youth Offending Team, Probation Service, and Victim Support work together to provide support for young offenders and their victims Acknowledgment First and foremost I want to thank my learners June Taylor who was always there for me to answer my questions . Last and surely not least, I want to acknowledge my wonderful friends and colleagues, some of whom read the report not once but two and three times. There was periods at my lowest point when someone would ask 'How's it going?' or 'What are you finding?', serving to renew my spirit and refocus my attention and energy. To those of you who I did not specifically name, I also give my thanks for moving me towards my goal. Introduction Youth crime has been present within society for many years. Generalised complaints about juvenile delinquency in the UK have been charted as far back as the seventeenth century, although modern forms of complaint did not surface until early in the nineteenth century. It is now estimated that roughly one quarter of all crime today is committed by people aged between ten and seventeen . There is no single reason that can explain why young people break the law and it is necessary to look at a number of possible explanations such as family life, the influence of peers, intelligence and attainment and drug misuse. ...read more.

Police stations in England and Wales are listed on the Police service website. Please click on the link on the right hand side of this page to locate your local Police Service. Online Reporting Certain categories of minor crime committed in England, Wales or Northern Ireland can now be reported over the Internet, as long as an urgent response is not required. You can access the online crime reporting website at www.online.police.uk b) the offender An offender is someone who has been found guilty of committing a crime. The information in this section will explain to offenders, or their families, what happens once they have been convicted. A range of sentencing options exist to punish an d rehabilitate offenders. When deciding on the type of sentence to impose the courts consider the type, seriousness and circumstances of the crime as well as the safety of the public. 3.1 Describe each stage of the Criminal/Youth Justice System from reporting through to sentencing. 3.2 Describe the role of people involved at each stage. The United Kingdom does not have a single, unified judicial system - England and Wales have one system, Scotland another and Northern Ireland a third. Criminal law is concerned with establishing and maintaining social order and protectiong the community. The 'rules' of criminal law aim to encourage and support safe and orderly living for all. Those who break these laws can be prosecuted. All criminal cases start in the magistrates' court. Some cases begin in the magistrates' court and then automatically go to the Crown Court for trial by jury. Other cases are started and finished in the magistrates' court. These are where the defendant is not entitled to trial by jury. They are known as summary offences. Summary offences involve a maximum penalty of six months imprisonment and/or a fine of up to �5,000. Trials The law presumes an accused person is innocent until proved guilty beyond reasonable doubt by the prosecution. ...read more.

Despite many people's attempts, teen violence is something that hasn't completely come to an end. Life is an organic ever changing phenomenon. Every man in this world is subject to pass by the circumstances and challenges of his age. Most of the young people commit crimes because there is no sense of community anymore. Outside their school and colleges, there isn't as much chance for the children to communicate among different parts of the society and most of them stick to the group they know. The children who have intellectual, talented genetic relations outshine others because of mainly their training. The youth whether indulge into wrong from right or right from wrong traces its background to it, upbringings and parental- childhood relationship. The children who in their childhood prong to harsh and exploitative environment in the early age of their learning, in adult age comes like an imbalanced personalities and anthema to society. To eradicate this menace of youth crime, we have to put all our efforts to popularise enlightenment, education, merit, equity, and equal opportunities of chance to everyone. Parents should be imparted values and education to teach and transfer it to children and so we would succeed in producing healthy and compatible youth. There are many organizations out there that help prevent teen violence, some which include the National Alliance For Safe Schools, Mothers Against Teen Violence, The National Coalition Against Domestic Violence, and more. Is there anything else though, that we can do to prevent teen violence from escalating to an even higher level? I hope so. Conclusion Some young crime is done because of the way they were raised. Parents that are careless to whom their child is handing out with, this is a situation were the child might get involved with the wrong crowd. The days of youth going to play in the park, going to school, hang out are all come to any end. These times are being replaced by breaking the law in most cases and will remain so until the law is changed and the rules become more strictly. ...read more.