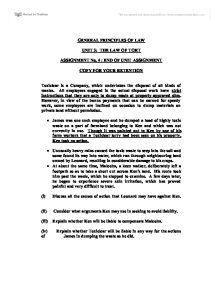 GENERAL PRINCIPLES OF LAW UNIT 3: THE LAW OF TORT ASSIGNMENT No. 4 : END OF UNIT ASSIGNMENT COPY FOR YOUR RETENTION Toxiclear is a Company, which undertakes the disposal of all kinds of wastes. All employees engaged in the actual disposal work have strict instructions that they are only to dump waste at properly approved sites. However, in view of the bonus payments that can be earned for speedy work, some employees are inclined on occasion to dump materials on private land without permission. * James was one such employee and he dumped a load of highly toxic waste on a part of farmland belonging to Ken and which was not currently in use. Though it was pointed out to Ken by one of his farm workers that a Toxiclear lorry had been seen on his property, Ken took no action. * Unusually heavy rains caused the toxic waste to seep into the soil and some found its way into water, which ran through neighbouring land owned by Leonard, resulting in considerable damage to his crops. * At about the same time, Malcolm, a keen walker, deliberately left a footpath so as to take a short cut across Ken's land. His route took him past the waste, which he stopped to examine. A few days later, he began to experience severe skin irritation, which has proved painful and very difficult to treat. (i) Discuss all the causes of action that Leonard may have against Ken. ...read more.

the removal of the nuisance. However: - * If there are two or more ways of abating a nuisance the less mischievous must be selected. * Entry onto the land of a third party is not permissible. * Notice should first be given to the occupier of the land in which the nuisance arises except: (a) Where abatement is possible without entry, or (b) In cases of emergency, such as a fire. For example, abatement allows a person to cut off the branches of his neighbour's trees if they overhang his land. This situation (the overhanging of branches) could constitute the tort of nuisance (e.g. the branches could obstruct the claimant's right to light (an easement)) or it could constitute the tort of trespass to land (see later). The claimant could, therefore, instead of instituting a Court action in either, or both, of these torts, simply cut off the branches that actually overhang his land. However, the actual branches that he cuts off still belong to the neighbour. They don't become his property merely because they overhang his land. Therefore, he must give the branches back to the neighbour. Remedies for the Tort of Nuisance: * Abatement of the nuisance (see above) * An action for damages and/or * An injunction to prevent the nuisance continuing. It is sometimes more important to have the nuisance stopped than to be compensated for it and, therefore, the remedy of an injunction is very important. Remember, though, it is an equitable remedy and therefore it is discretionary (see the cricket case of Miller -v- Jackson on page 10). ...read more.

An example of this is the liability that the occupier of premises has for injuries that may be sustained by persons on their premises. Two statutes - The Occupiers Liability Act 1957 and the Occupiers Liability Act 1984, now cover this area of tort. The first of these statutes dealt with an occupier's liability to lawful visitors and the second, to persons other than lawful visitors. An 'occupier' is a person who has some degree of control over the premises. He need not necessarily be the owner. It is also possible for there to be more than one occupier. "Whether a person has some degree of control arising from their presence or activity on the premises". (D) Explain whether Toxiclear will be liable in any way for the actions of James in dumping the waste as he did. Joint and several liability: liability is straight forward, with a single act causing loss or injury. Often more than one breach of duty or more than one act causes the damage, and liability may be independent or joint or several. Independent liability is straight forward, there are two separate tortfeasers which cause damage through separate torts; damage is separate, so each tortfeaser is liable for the particular damage caused. Joint liability can arise in a number of different ways. All torfeasers commit the same tortuous act, often with a shared purpose. If vicarious liability applies both the employer Toxiclear and the employee being James are jointly liable though only one would be sued. The person who created the nuisance (James) may be sued (i.e. court proceedings can be instituted against him or her) even if he has subsequently vacated the land. ...read more.