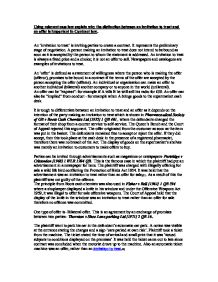 Using relevant case law explain why the distinction between an invitation to treat and an offer is important in Contract law.

Using relevant case law explain why the distinction between an invitation to treat and an offer is important in Contract law. An 'invitation to treat' is inviting parties to create a contract. It represents the preliminary stage of negotiation. A person making an invitation to treat does not intend to be bound as soon as it is accepted by the person to whom the statement is addressed. An invitation to treat is always a fixed price and a choice; it is not an offer to sell. Newspapers and catalogues are examples of invitations to treat. An 'offer' is defined as a statement of willingness where the person who is making the offer (offeror), promises to be bound in a contract if the terms of the offer are accepted by the person accepting the offer (offeree). An individual or organisation can make an offer to another individual (bilateral) ...read more.

The display of goods on the supermarket's shelves was merely an invitation to customers to make offers to buy. Parties can be invited through advertisements such as magazines or newspapers- Partridge v Crittenden [1968] 1 WLR 1204 QB. This is the famous case in which the plaintiff had put an advertisement in a newspaper for hens. The plaintiff was charged with illegally offering for sale a wild life bird conflicting the Protection of Birds Act 1954. It was held that the advertisement was an invitation to treat rather than an offer for sale,[1]. As a result of this the plaintiff was not guilty of the offence. The principle from Boots cash chemists was also used in Fisher v Bell [1961] 1 QB 394 where a shopkeeper displayed a knife in his window and under the Offensive Weapons Act 1959, it was illegal to offer for sale offensive weapons. ...read more.

Ltd [1893] 1 QB, the defendants sold a smoke ball and put an advertisement in the newspaper claiming they would play �100 to anyone who contracted influenza after using the smoke ball for a specified period. The plaintiff contracted influenza after having purchased and used as directed and claimed the reward. The defendants argued that it was impossible to contract to the whole world, nevertheless this was rejected by the Court of Appeal. The court had identified that for an advertisement to be viewed as an offer, it has to be very specific. In this case there were other implications, for example �1000 was placed in a bank account to show that it was serious, this highlighted the validity of the offer. We see the more specific an advertisement the more likely it is to be seen as an offer. Overall, It is extremely important to distinguish the differences between invitation to treat and offer, if the differences are not recognized the whole meaning and purpose could lead in to a different understanding which is incorrect. ...read more.

3 Stars, due to the foregoing.