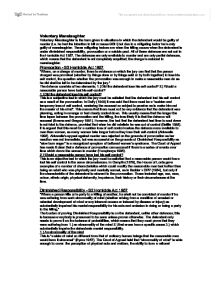 Voluntary Manslaughter Voluntary Manslaughter is the term given to situations in which the defendant would be guilty of murder (i.e. he had the intention to kill or cause GBH) but due to a mitigating factor he is only guilty of manslaughter. These mitigating factors are when the killing occurs when the defendant is under diminished responsibility, provocation or a suicide pact. All of these defences are set out in the Homicide Act 1957. The defences are only available to murder and are only partial defences, which means that the defendant is not completely acquitted; the charge is reduced to manslaughter. Provocation - S3 Homicide Act 1957 "Where, on a charge of murder, there is evidence on which the jury can find that the person charged was provoked (whether by things done or by things said or by both together) to lose his self control, the question whether the provocation was enough to make a reasonable man do as he did shall be left to be determined by the jury." The defence consists of two elements; 1.) Did the defendant lose his self control? 2.) Would a reasonable person have lost his self-control? 1.) Did the defendant lose his self control? This is a subjective test in which the jury must be satisfied that the defendant lost his self control as a result of the provocation. In Duffy (1949) it was said that there must be a "sudden and temporary loss of self control, rendering the accused so subject to passion as to make him not the master of his mind". ...read more.

2.) It must arise from a specific cause The abnormality must be caused by one of the matters set out in the brackets within S2 Homicide Act 1957. These are: 1.) A condition of arrested or retarded development - this includes an abnormality arising from a failure of the mind to develop beyond a certain point, e.g. Downs Syndrome. 2.) Inherent causes - this means a cause which is within the defendant like depression, pathological illness, trauma or paranoia as opposed to external factors such as alcohol or drugs. 3.) Induced by physical disease or injury - this is where some external cause has lead to a mental abnormality, e.g. being hit over the head by falling brickwork which causes a personality disorder or long term alcoholism or drug taking which leads to personality changes. Intoxication itself is never a cause for pleading diminished responsibility (Tandy). However many killings occur as a result of a combination of intoxication and mental abnormality (Sanderson). The defendants abnormality of the mind does not have to be the only reason for their act - the question is did he have an abnormality of mind when he was sober. The mental abnormality must exist independently of the intoxication and exist at the time of the killing. 3.) It must substantially impair defendants mental responsibilities This is for the jury to decide whether the difficulty the defendant has with controlling his conduct has been substantially greater than the difficulty a reasonable man would have experienced in the same circumstances or not. ...read more.

There are also problems with the wording of the act. The law commission stated that the words are unclear which means that in different cases different doctors have classed the same conditions in different ways. Some doctors will testify that reactive depressions and dissociated states of mind are inherent causes, while other doctors disagree. One main problem with diminished responsibility involves the jury. "Mental responsibility" and "abnormality of the mind" are difficult concepts for a jury to understand, and medical evidence is often complex and contradictory. lt can also be said that psychiatrists are usurping the role of the jury in that they are being asked to give an opinion on what many believe to be a moral question, when the psychiatrists should only state whether the abnormality actually exists. It is also difficult for juries when dealing with a case where the defendant has an abnormality of the mind and is intoxicated at the same time. It is hard for them to separate the two issues (Dietschmann). The jury are asked the difficult question "Would the defendant have still had an abnormality had he been sober?" rather then "Would he have killed had he been sober?" and then they have to decide whether the abnormality of the mind amounts to diminished responsibility. Finally, it can be said that the burden of proof should be on the prosecution to disprove the defence once the defendant has raised evidence of it, which is the case in most other defences. These problems were dealt with in the Butler Committee's proposal and the draft Criminal Code, but the government has not enacted either so these problems remain in the law. ...read more.