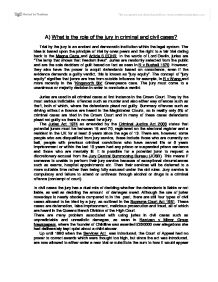 A) What is the role of the jury in criminal and civil cases? Trial by the jury is an ancient and democratic institution within the legal system. The idea is based upon the principle of trial by ones peers and the right to a fair trial dating back to the Magna Carta and Article 6 ECHR. In the words of Lord Devlin, juries are "The lamp that shows that freedom lives". Juries are randomly selected from the public and are the sole deciders of guilt based on fact as seen in R v Bushell 1670. However, they also have the power to acquit defendants based on conscience, even if the evidence demands a guilty verdict, this is known as "jury equity". The concept of "jury equity" signifies that jurors are free from outside influence for example, in R v Wang and more recently in the 'Kingsnorth Six' Greenpeace case. ...read more.

There are, however, some people who are disqualified from jury service, these include those who are currently on bail, people with previous criminal convictions who have served life or 5 years imprisonment or within the last 10 years had any prison or suspended prison sentence and those who are mentally ill. It is possible for a potential juror to request a discretionary excusal from the Jury Central Summoning Bureau (JCSB). This means if someone is unable to perform their jury service because of exceptional circumstances such as exams, hospital appointments etc. Then their services will be deferred to a more suitable time rather than being fully excused under the old rules. Jury service is compulsory and failure to attend or unfitness through alcohol or drugs is a criminal offence (contempt of court). In civil cases the jury has a dual role of deciding whether the defendants is liable or not liable, as well as deciding the amount of damages owed. ...read more.

For the reason of unpredictable damages the use of juries in Personal Injury cases was stopped after Ward v James 1996. Another reason it was stopped is because some cases are believed to be too technical for a jury this was seen in the case of Singh v London Underground 1990. Juries can also be found in groups of 7-11 members in the Coroners Courts. They try cases over suspicious deaths, for example deaths in police custody or in prison etc. As well as in cases of public interest, for example the death of Princess Diana or Jean Charles De Menez. The role played by the jury in criminal and civil cases as well as in the Coroner Courts is inevitably a crucial one. They are "masters of fact" that come to a unanimous or majority decision when deciding guilt, liability and damages. ...read more.

This answer shows a good understanding of the wide role of juries in civil and criminal courts. However there is a fair amount of material included that is not relevant to a descriptive question such as the one set.
In the section about criminal courts the answer could be improved by setting out the different verdicts that a jury can be required to return such as unanimous and majority verdicts and the mechanics of how jury discussions take place.
Rating ***