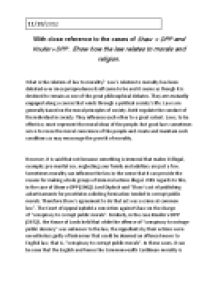 With close reference to the cases of Shaw v DPP and Knuller v DPP , Show how the law relates to morals and religion.

﻿11/18/2012 With close reference to the cases of Shaw v DPP and Knuller v DPP , Show how the law relates to morals and religion. What is the relation of law to morality? Law?s relation to morality has been debated ever since jurisprudence itself came to be and it seems as though it is destined to remain as one of the great philosophical debates. They are mutually engaged along a course that winds through a political society?s life. Laws are generally based on the moral principles of society. Both regulate the conduct of the individual in society. They influence each other to a great extent. Laws, to be effective, must represent the moral ideas of the people. But good laws sometimes serve to rouse the moral conscience of the people and create and maintain such conditions as may encourage the growth of morality. However, it is said that not because something is immoral that makes it illegal, example: pre-marital sex, neglecting your family and adultery are just a few. Sometimes morality can influence the law in the sense that it can provide the reason for making whole groups of immoral actions illegal. ...read more.

Fifthly, laws are studied under Jurisprudence while morality is studied under Ethics. How really is law and religion connected? The religion of the European colonizers was and still continues to be Christianity, which is said to have influenced the English law. This religious influence was so strong that religious rules were given statutory force and validity. For example, the religious rules ?thou shalt not steal? and ?thou shalt not kill? have been made law. Although law and religion are often said to be separate, it is important for the government to discuss the relationship between the two. In order for separation to be set in place between law and religion, the government has to sit down and devise these formulas that are going to promote the separation. In the government?s discussion about laws and religion, it is important that whatever new laws that are composed in regards to law and religion still hold true to giving people the religious freedom that they want. The separation between laws and religion is about making sure that the people are content with the decisions that they make. ...read more.

Secondly, The Supreme Court has gone on to pass further sanctions in regards to laws and religion throughout the years. Lastly, in the government?s discussion about law and religion, something that is at the heart of the discussion is what is acceptable in terms of religious displays in public places. This goes from anywhere to the law and religion discussions as to what monuments with a religious connotation are permitted, and what religious symbols one can wear in their daily lives. As the religious discussions continue to unravel, it is all in an effort to strengthen the relationship between laws and religion. In conclusion, for Lord Denning, the most influential and renowned judge of modern times, the relationship between ?religion?, ?morality? and ?law? was clear. He once commented that, ?Without religion, no morality; without morality, no law. ?Religion? and ?morality? were entwined as were ?morality? and ?law?. Morality and law are not the same although of course they overlap. Law might be thought of as a public codification of morality for a culture, although certain laws in that system, or even the system itself, might be deemed immoral, example, Apartheid. Law is not a necessary attribute of morality although morality may be thought to be a necessary attribute of law. ...read more.

Starts off well, particularly the second paragraph. But then quickly loses pace.

Other issues that might have been addressed include: the principles of Natural Law Theory, Positivism (an example is provided in this essay - do not kill) and Legal Realism; euthanasia-type issues; the cases of Brown, Wilson and Donovan etc.

Overall, this essay suffers from a lack of structure and argument.