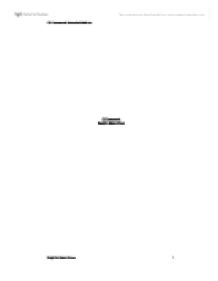 C3 Coursework: Sapphire Mason-Brown C3 Coursework Numerical Methods The place in which the graph of a line crosses the x axis is known as the root of the equation. It is not always possible to find the solution of an equation by algebraic or analytical methods such as factorising. This applies to equations such as y=3x3-11x+7. To solve equations such as these, numerical methods such as change of sign, x=g(x) and Newton-Raphson can be used to give estimates of the roots. Change of Sign Method The Change of sign method is a method used to look for when a sequence of numbers in the boundary of a root change from negative the positive or vice versa. This change means that the root of the equation is somewhere between the interval where there is a change of sign. This is the graph of the equation y=3x3-11x+7 There are 3 roots to the equation y=3x3-11x+7, this is illustrated by the three intersections with the x axis. There appears to be a root between 0 and 1. By taking increments of 0.1 between 0 and 1 it will be possible to use decimal search to look for a change in sign. This will make it possible to find an approximation for to the root between 0 and 1. This table shows the results of the numbers in increments of 0.1 between 0 and 1. ...read more.

To conclude, I believe the method that was easiest to use with the software was the x=g(x). This is because, it required the least work and using the method was not as tedious. It was easy to notice any typing errors in my formula as the formula was not greatly complex. Although an element of manual work was required to use the x=g(x) method (re-arranging the equation) it was partially eliminated by the simplicity of typing in the x=g(x) equation and replicating it. The second easiest method to use with the software was the Decimal search method. Although this required slightly more work than the other two methods, the software made this additional work less time-consuming. As the formulae and intervals between the numbers could easily be replicated the decimal search method was fairly simple to use in conjunction with the software I used. The method that was the least easy to use with the software at hand was the Newton Raphson method. This is mainly because of the complexity of the formula. As a result of this complexity it was more difficult to notice any typing error made when inputting the formulae used. This method was also not as simple because the software does not calculate the whole formula. An element of manual work is still required to differentiate the formula and substitute the different areas of the equation into the Newton Raphson Formula. ?? ?? ?? ?? C3 Coursework: Numerical Methods Sapphire Mason-Brown 1 ...read more.