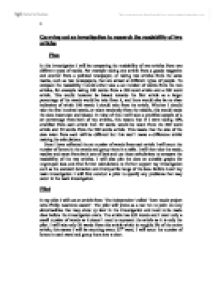 Carrying out an investigation to research the readability of two articles

Carrying out an investigation to research the readability of two articles

In this investigation I will be comparing the readability of two articles from two different types of media. For example taking one article from a gossip magazine and another from a political newspaper, or taking two articles from the same media, such as two newspapers, that are aimed at different types of people. To compare the readability I could either take a set number of words from the two articles, for example taking 100 words from a 300 word article and a 500 word article. This would however be biased towards the first article as a larger percentage of the words would be take from it, and there would also be no clear indication of which 100 words I should take from the article. Whether I should take the first hundred words, or taken randomly from the middle, this would make the data inaccurate and biased. In view of this I will take a stratified sample of a set percentage from both of my articles, this means that if I were taking 10% stratified from each article then 30 words would be taken from the 300 word article and 50 words from the 500 words article.

Anything other than what is stated above is to be included in the data count. I will now begin collecting my data for my main investigations.

The two articles I will be comparing are from two different magazines, one a gossip magazine called ‘Reveal’ and the other a music magazine called ‘Kerrang!’. The first article from the ‘Reveal’ magazine has a main title of ‘I Beat Beyonce to No 1’ and has a total of 457 words, the second article from the ‘Kerrang!’ magazine is called ‘The Astonishing Rise Of Guitar Hero’ and has a total of 651 words. There is around a 200 word gap between the two articles, but because I am taking a percentage this shouldn’t make a difference in the final results. I am going to take 20% of the words from each article; this means I will be taking 91 words from the Reveal article and 130 words from the Kerrang! article.

For the ‘Kerrang!’ article the median and Interquartile range are:

For the ‘Reveal’ article the Median and Interquartile Range are:

I have used the Interquartile Range rather than the range of the data, as the range is not as reliable, this is because it can be affected by very high and very low pieces of data whereas the Interquartile range is only the range between the first and third quartiles. This eliminates any outliers which may affect the data.

I will now put the average results into a table below.

The two articles have the same mode; however this does not represent the average properly as it does not use all of the data. The ‘Kerrang!’ article has a higher average of word length than the ‘Reveal’ article.